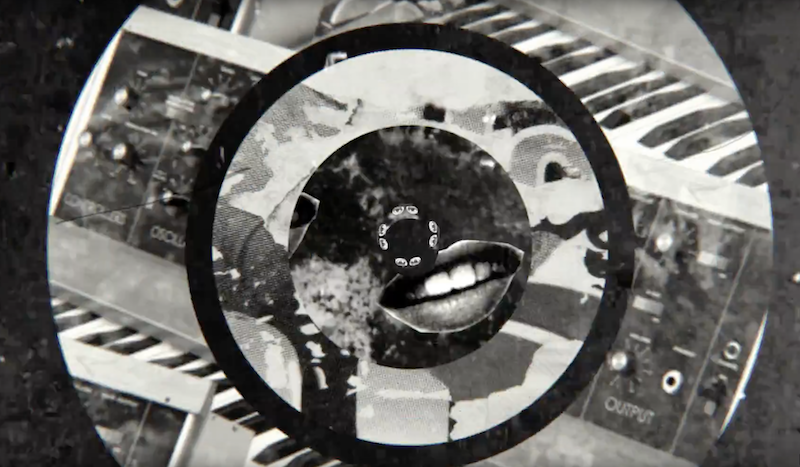 After recently announcing their new album ‘Black Rainbow Sound’ is set for release August 31st via Memphis Industries, Leeds-based Menace Beach are sharing a new video for the lead single, which features vocals from Brix Smith.

Speaking about the video, Liza Violet of Menace Beach said “It was created by Sara Serna who is a collage animator, graphic artist and musician living in Medellin, Columbia. We’ve been chatting about doing a collaboration for a while after we got friendly via Instagram. I love that she seems to get a lot of imagery from her local area and a lot of her artwork seems to touch on her country’s past and present political and social history.”

Director Sara Serna added “Each part of the video was designed and animated in cut out style, handmade and lo fi combined. The idea was to create a chaos of paper, using plants and dark animals, along with some details of the band in between.”

New album Black Rainbow Sound is the band’s first new material since early 2017’s Lemon Memory, and after a self-imposed break from tour duties, the album exhibits a profound shift in their sound, whilst still mainlining the blasts of noise, visceral power, and timeless pop songsmithery of their previous releases.

Unlike the bands previous records, Black Rainbow Sound came to life in the bands studio, where Liza Violet and Ryan Needham built dense late-night orchestrations from drum machines, synthesizers, loops and guitar noise, before being ripped apart and reimagined by the full Menace Beach cast at The Nave studio in Leeds with producer Matt Peel (Eagulls).

Never ones to shy away from an intriguing collaboration, Black Rainbow Sound contains songs featuring Brix Smith of The Fall, and Brix and the Extricated. “The synchronicity of the universe just forced us and Brix together. The very day l finished reading her biography she played us on her BBC 6music show along with a wonderfully out-there monologue of how the song made her feel. I said thanks, we got chatting and it went from there. She’s a burning comet of positive energy”

On Black Rainbow Sound, Menace Beach continue to explore their own unique aesthetic, venturing much further into a colourful world of bizzaro no-wave analogue synths and static drenched electronic euphoria, which they have been circling for some time.

“Liza has always made electronic music and has a very unique approach to what she creates on her synths so I knew she’d do something magical if she took the reins in the studio. Turns out she was planning a subtle-yet-hostile takeover all along anyway.”

Liza adds “There’s always been a bit of artistic push and pull between us on the balance of synth noise vs guitars noise and the guitars have previously always taken over, probably because we all know now how to make loud guitars sound really exciting in a room. But when we started writing this record I was feeling too much reality in the sound of a guitar and I really wanted to give something more this time. Once I had the sounds in my head I couldn’t really compromise.”

Lustrous, dizzying, and bursting with cacophonous vintage electronics – the sounds on Black Rainbow Sound act as an otherworldly backdrop for the album’s enigmatic lyrics to play out. Celestial conversations, night terrors, love, anti-love, good vs evil, light vs dark, friendly crows, death, depression, and teenage tongues and are all here to absorb; the more introspective topics often hidden in plain sight atop celebratory choruses, and melodic hooks.