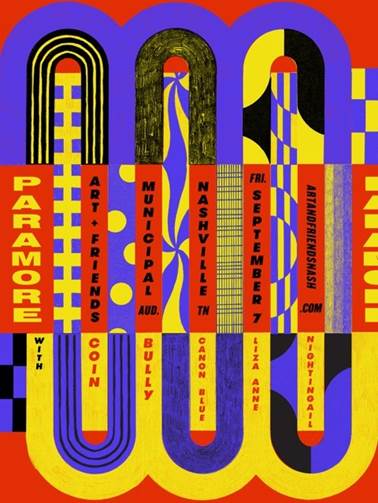 Paramore has today unveiled the official video for “Caught In The Middle”, taken from their fifth studio album, “AFTER LAUGHTER”. The video – directed by Computer Team – is streaming now at Paramore’s official YouTube channel.

“We want to celebrate our hometown and the fast-growing, wacky and wonderful alternative music and arts community of Nashville. We want to show you what our fine city has to offer, outside of bachelorette parties and karaoke bars…Take it from a group of kids who grew up right here in this city – the new Nashville is definitely alright with us. We’re excited to give everyone a chance to experience Nashville the way we do.” – Hayley Williams

Paramore’s fifth studio release, “AFTER LAUGHTER” is available now at all retailers and streaming services via Fueled By Ramen Records. Highlighted by such hit singles and videos as “Hard Times,” “Told You So,” “Fake Happy,” and “Rose-Colored Boy,” all available now for individual purchase at all DSPs and streaming outlets, the album debuted on the SoundScan/Billboard 200 at #6 upon its May 2017 release – Paramore’s third consecutive top 10 chart debut. The album ultimately proved one of the year’s most critically applauded releases, with Billboard, The Guardian, Rolling Stone, and Stereogum each ranking it among their “Best Albums of 2017” charts.

Paramore celebrated “AFTER LAUGHTER” by spending much of 2017 on the road, drawing rapturous acclaim from coast to coast. “A 2017 Paramore concert impresses simply by stacking the hits on top of each other until the lights come up,” enthused SPIN, while Billboard raved, “(Hayley) Williams fulfilled her frontwoman duties to the fullest, with hair-flip headbanging and can-can kicks galore, but perhaps most necessary — at least for the timing of this particular show — plenty of heartfelt and poignantly uplifting statements to keep spirits high.” “Paramore’s show is equal parts therapeutic,” declared The Independent, “and plain old fun.” Perhaps Mashable said it best: “Unafraid of emotion, Paramore delivers the therapeutic pop-rock show 2017 needs.”