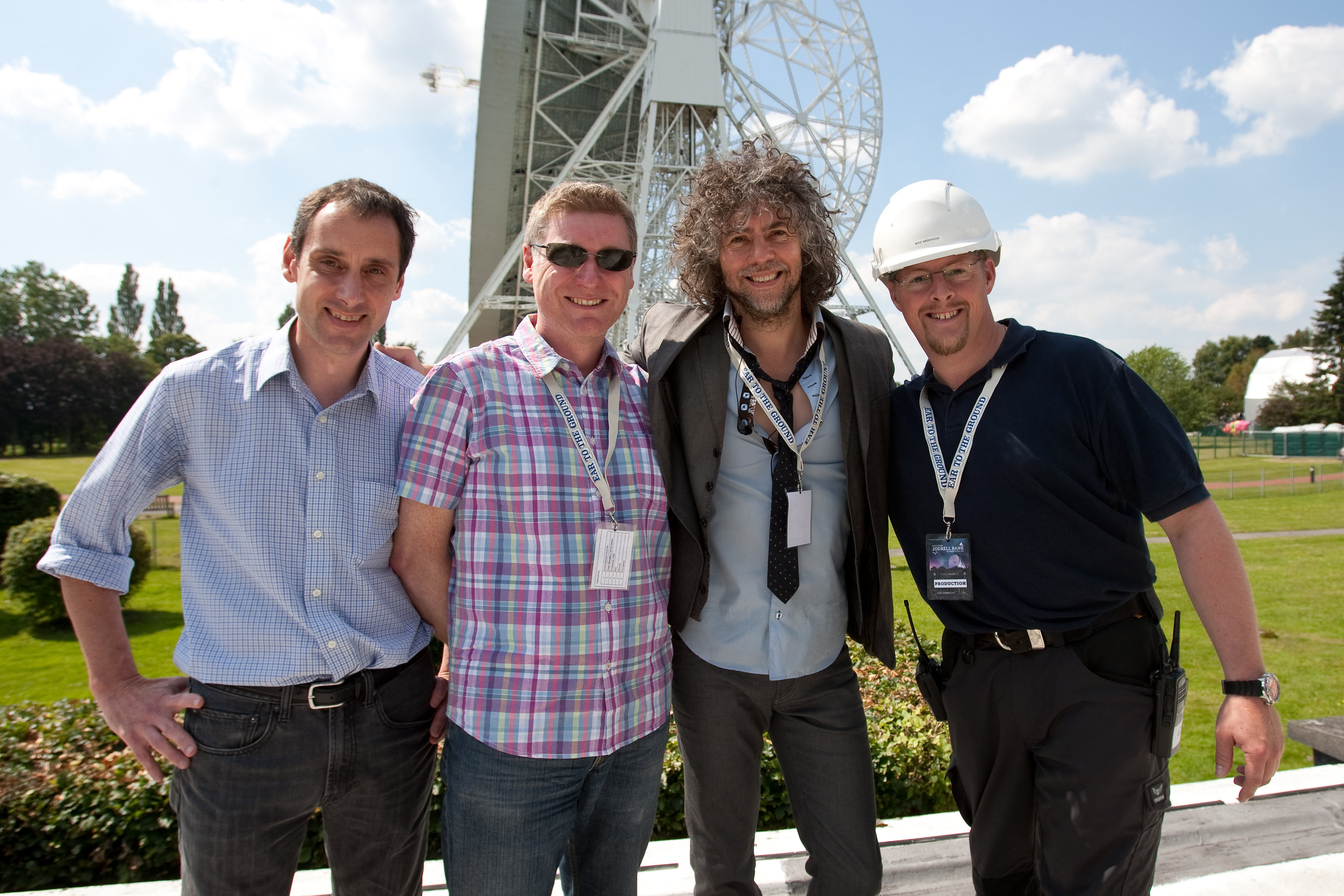 There’s no other festival in the same universe as the unique and award winning bluedot, which returns to Jodrell Bank Observatory in less than a month’s time. Where else could you warm up for the Chemical Brothers with a talk from Richard Dawkins? On what planet would Robin Ince and The Flaming Lips be on the same bill? BBC2’s star astronaut Suzie Imber sharing tales of her space odyssey before Future Islands or Gary Numan dazzle on the main stage? Not to mention the Blue Planet In Concert with The Hallé and a host of stars like Alice Roberts, Dallas Campbell and Jim Al-Khalili right there to fascinate and delight.

Only at bluedot, under the breath-taking majesty of the Lovell Telescope, can you find all of this – and so much more – in a true festival of mind-expanding, family-friendly cultural celebration.

NEW: bluedot are thrilled to announce a meeting of great music and science minds as Flaming Lips frontman Wayne Coyne will be In Conversation with Professor Tim O’ Brien, Associate Director Jodrell Bank Centre for Astrophysics, and avid explorer of exploding stars.

The Flaming Lips headlined the first major music event at Jodrell Bank back in 2011. Wayne was given a personal tour of the Control Room before performing a landmark show beneath the iconic Lovell Telescope, declaring it was “the greatest place to be on Planet Earth”. During the tour, Tim and Wayne discussed our understanding of the Universe, the search for extra-terrestrial life, and the possibility of alternative dimensions. This coming together of the worlds of music, space exploration and creativity is what now lies at the heart of the bluedot festival.

These key themes and more will be explored at this exclusive In Conversation. This and the return of The Flaming Lips is set to be a momentous occasion in the bluedot cosmos.

NEW: Today the team also announces the brand new Roots Stage, produced in partnership with Arts Council England and legendary Manchester venue Band on the Wall. Over three days, the Roots stage will feature stunning music from South Asia, some of the most exciting emerging urban jazz talents, and a programme of afro-caribbean grooves.

Friday’s lineup is a celebration of South Asian music, and features some of India’s finest musical exports – a number of whom performed across Manchester recently as part of the recent New North and South programme. An unmissable performance will be the British-Asian supergroup Electronic Empires who were formed specially for New North and South, and perform only their second ever show, after a sold-out debut at Band on the Wall.

Saturday will be a focus on some of the most exciting names in modern jazz, soul and global R&B, including Band on the Wall favourite XamVolo, Columbian pop sensation Lao Ra and Aaliyah Esprit, a young jazz-inspired R&B vocalist recently hyped by Gilles Peterson and Brownswood’s Future Bubblers programme.

On Sunday the lineup features artists from across Africa and the Caribbean, including a performance from one of the finest Kora masters in the world, Jali Nyonkoling Kuyateh, celebrated reggae musician Golty Farabeau coming all the way from the Seychelles, and djembe maestro Sidiki Dembele who previously performed with the much-renowned Afrika! Afrika!

The Roots Stage joins bluedot’s already stellar line up, spanning all corners of music, cosmic culture, comedy and more, with a ground-breaking programme of live science experiments, expert talks and immersive artworks for one of the most unique festival experiences in Europe.

bluedot is dedicated to exploring the latest scientific discoveries from outer space and our planet, with a topical and important focus this year on sustainability. With DotTalks from world-class scientists and thinkers, including the award-winning evolutionist and outspoken atheist Richard Dawkins, author and broadcaster Dallas Campbell, winner of BBC2’s ‘Astronauts: Do You Have What It Takes?’ Suzie Imber, plus Jodrell Bank’s own Teresa Anderson and Tim O’Brien, expect discussions around key issues such as sustainability, climate change and the exploration of space, with opportunities to ask the Big Questions of leading researchers. Backed up by an inclusive and exciting array of hands-on science experiments and explosive interactive shows, bluedot’s expansive science programme caters for the whole family.

Opening Thursday night, ahead of the Blue Planet in Concert, is a very special discussion from the British Antarctic Survey. Bird ecologist Dr Lucy Quinn and BBC Natural History TV producer Yoland Bosiger will take to the stage for an enlightening and eye-opening Q&A session, focusing on how BBC’s Blue Planet II made plastic in the oceans a global issue.

New DotTalks announced today:
Universe Under Construction with Scott Kay – Telescopes are getting bigger and better, allowing us to map the observable Universe over almost its entire 14 billion year history. With the vast amount of data now being collected, we are trying to piece together the puzzle of how galaxies were made and how they grow and develop. However, one problem we face is that galaxies change very slowly, on timescales of tens to hundreds of millions of years. So how do we convince ourselves that our understanding of the Universe is accurate? In this talk, Scott Kay will show that vital insight can be gained using computer simulations. By combining our understanding of basic physics with powerful supercomputers, we are able to construct virtual universes that are becoming increasingly realistic. And, as we don’t have to do this in real time, we can make movies to study how individual galaxies form and change over the history of the universe.
Anna Bonaldi presents Bigger, Better, Faster, Further – Back to the Cosmic Origins with the SKA telescope – Anna will discuss how astronomers are planning to build the world’s largest telescope. Sited in the deserts of Australia and South Africa but with its international headquarters at Jodrell Bank, the Square Kilometre Array is set to revolutionise our understanding of the universe, looking billions of years back in time to the birth of the first stars.

Comedy from the inimitable Robin Ince, Cassetteboy, Gary Delaney, David O’Doherty and Jess Fostekew, talks from Rick Edwards and Dr Michael Brooks, art installations from ‘Museum of the Moon’ creator Luke Jerram, plus immersive theatre, live shows and much much more, bluedot is a festival to expand your mind.

The Future Of The Past – How do leading poets and novelists draw on the past to make new poems and fictions? Why are they drawn to particular period and how do new ideas about memory and commemoration inform their work? With Ian McGuire, Frances Leviston, Paul Batchelor and Beth Underdone on the panel.

The Future Of The Book – The book has been at the centre of our culture for millennia, but seems now to be under threat as never before. How does the book co-exist alongside our use of digital media, and in the experience of cutting edge innovative writers, how do social media, literary journals, and performance change the ways books are made and read now? With panellists Kayo Chingonyi, Honor Gavin and David Hartley.

Both are organised by The University of Manchester’s Centre for New Writing and will be chaired by John McAuliffe, poet, lecturer and editor of The Manchester Review

“Wish I’d seen him sooner…Paul Currie was my favourite comedy show of the fringe.” – Stewart Lee

The Delightful Sausage: “One of the best adverts for modern alternative comedy you could ever wish to see.” Ed Fest Mag

Kemah Bob: “pro-black, sex positive and will leave a funny taste in your mouth. Come for the jokes, stay for the heartbreak.” – Chortle

“Danny McLoughlin is a class act…His innate comic timing, insightful digressions and ability to think on his feet puts him alongside the most talented and genuinely funny comedians.” – ThreeWeeks

Simon Lomas: “different to any act I’ve ever seen before” – Bruce Dessau

Foxdog Studios – “Foxdog’s shows rely heavily on audience participation…Using a combination of augmented reality, robotics and interactive technology, they allow audience members to join in the action from the comfort of their smartphones.” – Wired

Many of the stars of bluedot’s signature DotTalk series will be available to meet fans and sign copies of their latest works. The famous bookshop Blackwell’s – announced this week to be the fastest growing bookseller in the UK – will have a pop-up store right on site, where all the titles will be available to buy, as well as at the signings themselves. Taking part will be:

PRS Foundation, the UK’s leading charitable funder of new music and talent development, together with The New BBC Radiophonic Workshop, present the second annual Oram Awards celebrating innovation in music, sound and related technologies by the next generation of forward thinking women. The ceremony will take place at bluedot on Friday 20th July hosted by BBC Radio 3 and 6Music’s Elizabeth Alker.

Vanessa Reed, Chief Executive of PRS Foundation says, “We’re delighted to be celebrating the second Oram Awards at bluedot Festival this year with Matthew Herbert and the New BBC Radiophonic Workshop. There are many talented and exciting female music and sound innovators in the UK and the Oram Awards is a brilliant way of recognising and supporting their work and promoting role models for the next generation. I’m looking forward to seeing who will be shortlisted and the impact our talent development bursaries will have on their next steps.”

Full weekend camping tickets are still available and start from just £169, with entry for under 5’s free. Day Tickets available from £59.75. Thursday-only tickets, for Blue Planet In Concert with The Halle – are available from £29. Our boutique camping offers a vast and varied selection of luxury accommodation options for those who prefer an extra touch of comfort. www.discoverthebluedot.com/tickets