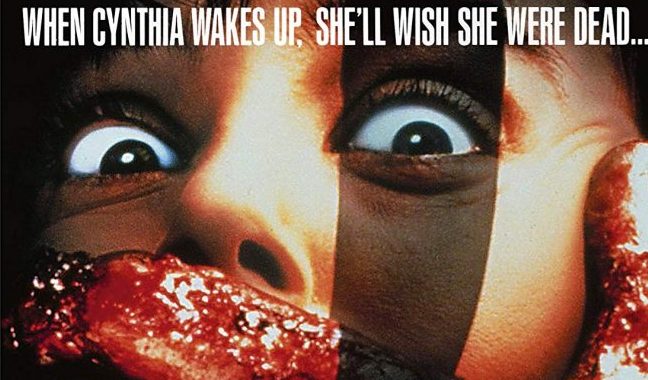 A Nightmare on Elm Street was made in 1984 by horror maestro Wes Craven. That film was a game changer for the horror slasher, taking it in a different direction for the genre with the bogeyman now appearing in your dreams. Freddy Krueger spoke, was maniplative and clever unlike the mute bogeyman of the Halloween and the Friday the Thirteenth films. Bad Dreams (1988) released by 88 Films was a forgotten and critically panned horror film because of its sort of closeness to the Freddy Kruger bogeyman in your dreams idea. The previous year to Bad Dreams being released the third Elm Street film was released: A Nightmare on Elm Street: Dream Warriors (1987) and as a result was considered too similar to the Elm Street films. That comparison is made all the more vivid in that the star in both Bad Dreams and Dream Warriors was Jennifer Rubin.

The films opens in a rural house and tragic a fire. It transpires that the house was owned by a cult led by the creepy Harris (played by the late Richard Lynch). During a secret ceremony he pours petrol over his followers as though they were being anointed and sets fire to the whole house. The plot then moves to a mental health institution where the only survivor, Cynthia wakes after 13 years in a coma. Naturally much habilitation is needed and she attends therapy sessions with others who also require treatment for their borderline personality disorders which is led by the young Dr. Alex Karmen (played by Bruce Abbott, best known as Dan Cain in the Re-animator films). A short while later Cynthia starts seeing Harris who haunts her dreams and waking moments, appearing as normal and a burnt disfigured corpse alternately. He tries to invite her back with the brothers and sisters from the cult. One by one Harris causes the deaths of her fellow patients.

The criticism that was meted out to this film is a tad unfair. It even makes me wonder if any of its detractors have even seen Bad Dreams. Yes it is gory and delivers in the usual shocks, but for a cheap 1980s horror film it is very well acted from Lynch as Harris and Rubin showing genuine confusion and projects the right degree of vulnerabilty as Cynthia. It is only towards the end of the film do we start to enter the silly territory both in plot and dialogue with an ending that feels rushed. It also gets lost among other films with similar themes such as Slaughterhouse Rock (1988, also released by 88 Films) and Wes Craven’s own Shocker! (1989). Nevertheless, for the most part until we get to the films conclusion it works very well, with Rubin and Lynch particularly doing great jobs. On an extra on the disc Rubin goes into her own experiences and treatment for a form of autism she developed as a sickly child, describing how she brought some of those experiences into her role in this film. This was the debut feature for director Andrew Fleming who went on to mostly work in TV and has made only a handful of films including The Craft (1996), a cult teenage film about high school witches. In that sense Fleming brought some good acting to the film.

There are plenty of extras on the disc. As well as an extended interview with Rubin, there is also one with Fleming, as well as a deeper understanding and appreciation of the film by Spencer Murphy. In addition there are also commentaries by the team from Mondo-Digital.com, giving informed opinions, reflections and interpretation. An extra on the disc (as well as a limited edition including a slipcase) is a handsomely packaged booklet highlighting the top 30 slashers made between 1960 – 1999 including Hitchcock’s Psycho (1960) through to the usual classics and some praise for some surprisingly lauded entries including The Bogey Man, Happy Birthday to Me and My Bloody Valentine (all 1981). It’s good to see that Bad Dreams is included in 88 Films top 30 slashers though.