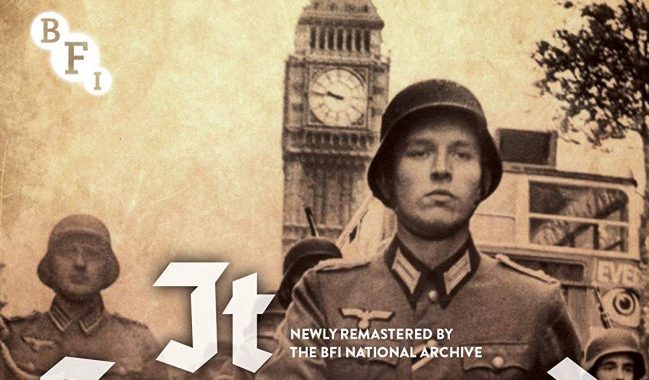 There have been many films and dramas that have toyed with the WHAT IF notion of what would happen if the Nazis had successfully invaded Britain in the planned Operation Sea Lion. There are two very well known films about the Nazis covertly invading small English villages: Went the Day Well? (1943) and the later The Eagle Has Landed (1977). Later still there was the popular Robert Harris book, Fatherland, made into a disappointing TV movie in 1994. More recently there was the TV drama, the 2017 ‘SS-GB’, adapted from a 1978 novel by Len Deighton. It Happened Here (1964) is probably the best and starkest example of what Britain would be like under Nazi occupation and under the rule of fascism.

The film opens with a brilliantly realised piece of recreated newsreel footage in German showing how the Germans conquered England and Wehrmacht soldiers relaxing played to a German martial version of ‘Hang Out Your Washing on the Siegfried Line’. Outside of Salisbury, we also see atrocities carried out by Nazis on English villagers. In other words an echo of the familiar footage in occupied France and the East. 20 minutes in another montage played to martial music shows soldiers fraternising with the Brits and sightseeing, including soldiers gathered around the German cultural heroes honoured on the Albert Memorial. We see the struggles of ordinary Brits, realistically dressed in shabby period utilitarian clothes. We are then introduced to the protagonist in our story, Pauline (played by non-professional actress, Pauline Murray), a widow who is learning to get by. The year is now 1944 and most of the SS and Wehrmacht are pre-occupied by war in the East and leave the authorities under the BUF (British Union of Fascists) Blackshirts to run the country. The resistance begin lightening attacks, armed by their American backers. Pauline, in order to survive, accepting the situation blends in and joins the BUF auxiliary medical corps, the IMO (Immediate Action Organisation) and in time learns the horrors of fascism as an ideology.

This was the first film and project for film historian and conservator Kevin Brownlow (whose greatest coup in recent years was the restoration of Abel Gance’s Napoleon, 1926, also released by the BFI). Brownlow took many painful years to make this film in accurate and stark detail and with minimal funds costing an estimated $20,000 and collaborated with Andrew Mollo who was fastidious with the accurate detail. They relied for the most part on non-professional actors and the technical advise of many who experienced the war from both sides as well as using authentic uniforms.

Although Brownlow and Mollo were able to get distributors in the shape of United Artists, this came at a heavy price. The film was heavily criticised by the British press and United Artists insisted on the brilliant scene in which BUF officers extols the virtues of fascism unchallenged including advocating euthanasia and getting rid of the Jews. This demand of a cut infuriated Brownlow and Mollo. Elsewhere, because of the scene that was eventually excised and the notion that Brits would be anti-semitic and willing collaborators was too much for many and very un-British behaviour. This completely demonstrates the ignorance by many who do not understand how fascism works or disregards that racism and anti-semitism not only exists in British society but is as prevalent as anywhere else; it is often forgotten that there was strong anti-semitism before the war and, if the current stories are to be believed still exists.

I for one am glad that BFI have released It Happened Here (1964) now. The timing of the release of this film allows for much meditation on our current political situation in the UK. The rise of Nationalism into fascism is most certainly not something peculiar to Germany. Since the Brexit referendum there have been signs that “British fair play” and the country as a tolerant society has been severely tested as some have seen Brexit as a justification and now feel entitled to air their intolerance and prejudices. Brownlow has to be given much praise, clearly then misunderstood as many saw the opposite of what he was actually trying to say as a warning about the nature and seduction of fascism. In order to achieve this the directors had to think how a fascist and Nazi ideology would think. Images of the 159 bus to Streatham and a column of German infantry walking past, as well as the march past the Houses of Parliament is still striking.

What is remarkable is that no newsreel or stock footage was used and that used is all original to the film. It was shot by prolific cameraman Peter Suschitzky, who would later go on to film many great British and Hollywood films including for Ken Russell and The Empire Strikes Back (1980) and the restored High Definition transfer brings out the strong black and white photography of Suschitzky’s camera. The extras on the disc are extraordinarily complete and thorough from the hour long interview with Brownlow on the making of the film, footage of the filming and contemporary pieces about It Happened Here as well as a complete version of the German newsreel footage at the beginning of the film. There is also behind the scenes footage, interviews with directors Brownlow as well as a thorough and well written fully illustrated booklet to accompany the disc with essays by Brownlow, contemporary reviews and an interesting essay by BFI’s own Josephine Botting.