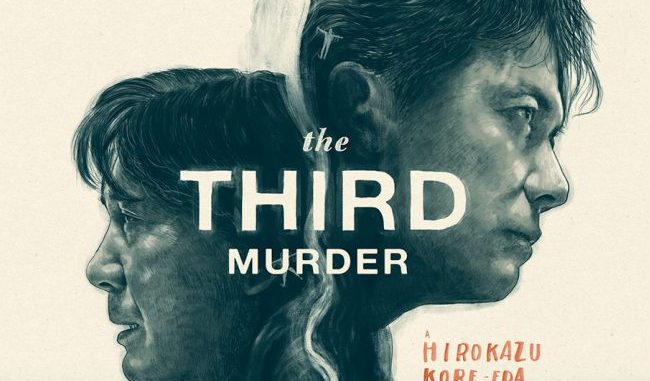 The Third Murder (2017) represents a fresh departure for Japanese director Hirokazu Kore-eda. Already this year Arrow Academy have released a box-set of three of his films: I Wish (2011), Like Father, Like Son (2013) and After the Storm (2016); of which After the Storm was also released by Arrow Academy as a stand alone film. For those familiar with his work would be aware that most of his films are powerful small family dramas. While The Third Murder is also a family film, its also a murder thriller and a courtroom drama. It maintains the director’s usual theme of familial secrets that are slowly revealed to the viewer, but nevertheless is not an everyday drama and marks a fresh departure for the director.

The film begins with the gruesome murder itself. The scene is at night and a man is by a river where he is murdered, his wallet stolen and his body dowsed in petrol and set alight. It doesn’t take long for someone to be arrested for the murder, a man called Misumi (Koji Yakusho) who confesses to the murder. Misumi had been sacked by the industrialist he has been accused of murdering and this is seen as the motivation of the murder. For many this is an open and shut case, but young lawyer, Shigemori (Masaharu Fukuyama) and his legal team are intrigued by the accused and the murder. It turns out that Misumi had previously been sentenced for a murder some 30 years before. Misumi is also made aware that he faces the death sentence if found guilty. Shigemori digs deep into the investigation and finds that the dead man’s wife, although grieving will not condemn the suspect, while the enigmatic daughter stops just short of being complicit to the murder. In time, as Shigemori digs deeper, Misumi continues to change his story drastically only indicting himself more and intriguing and frustrating Shigemori in equal measure.

As Asian cinema expert Tony Rayns points out in an extra discussion on The Third Murder, there are very few courtroom dramas in Japanese cinema, unlike in Hollywood. One exception is I Just Didn’t Do It (2006) from director Masayaki Suo. Indeed Rayns is able to name and discuss all the few courtroom dramas made in Japan. In the accompanying Making Of documentary, director Kore-eda went into great detail for the preparation of this film including working with lawyers to ensure that the dialogue and the approach would be highly accurate. Lawyers even took part and played the key roles in rehearsals to ensure that accuracy is maintained. And indeed the dialogue does feel authentic. But the court case itself is only a small part of the film which mostly focuses on Shigemori’s investigation, his character and his indecision as to what the truth is.

Sometimes the change of Misumi’s story is a little frustrating and at times contradicts the shots we see during the films open. The daughter of the dead man’s character (played by Hirose Suzu) too feels a little underdeveloped, yet the drama, slow burning suspense keeps the film moving. The acting too is outstanding from all involved and Kore-eda has most certainly brought out the best from his cast. Asides from the two aforementioned extras, the only other significant extra is an introduction to the film by the lead players.