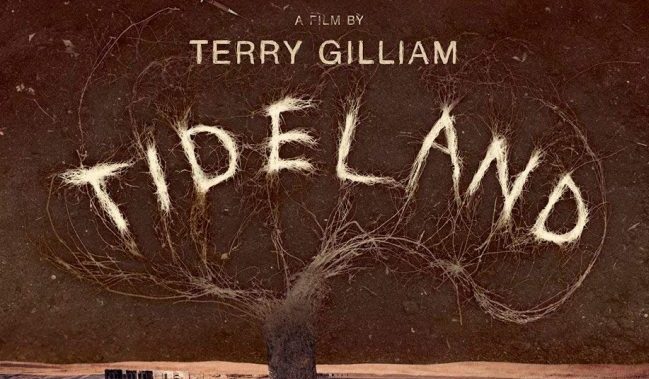 “Many of you will not like this film, many, thankfully, will love it” so says Terry Gilliam in his introduction to his strange Tideland (2005), the latest release on Arrow Video. He’s not wrong there. Tideland is a macabre tale with a magic twist given that it is a of discovery through a child’s eye. In Gilliam’s own words it is a mix of “‘Alice in Wonderland’ meets Psycho“. The former is easy to read as the heroine of the story, 11-year-old Jeliza-Rose (Jodelle Ferland) is reading Lewis Carroll’s classic novel in the film, there are talking animals including a squirrel, there is, at least in her imagination a wicked Queen and drugs are central to the story, in a less disguised and more devastating and realistic showing. The latter is a little harder to read other than being Southern Gothic, but is more related to the Texas Chainsaw Massacre (1974) in many ways from its Gothic feel and embalmed corpses than Psycho.

Jeliza-Rose lives with her dysfunctional trailer trash parents, her father, former rock star viking obsessive Noah (Jeff Bridges), who she helps jack-up on his fix by and her washed up has been, overweight, lazy chocolate eating mama (Sally Crooks). When Ma dies of an overdose on her bed, Noah and Jeliza-Rose travel to the countryside by greyhound to the girl’s late grandmother’s house in the middle of wheatfields. Noah’s parenting skills are more than wanting, but clearly loves his daughter. When they arrive, the place is rundown and shabby in more than a need of a lick of paint. Again Jeliza helps her father with his heroin fix in an armchair.

Jeliza-Rose lives in a fantasy world, creating an imaginary world around her. She tends to her father, dresses him in a wig but doesn’t realise that he too is dead, having overdosed. The audience too is not immediately aware until we see his blue tongue. Jeliza-Rose continues to play and communes with him when she gets to know two neighbours, the sinister and prickly witch like Dell (Janet McTeer) and her younger brother, the simple minded Dickens (Brendan Fletcher) who had a lobotomy when he was younger (more dysfunction). There is uncomfortable flirting between the pair and a blossoming relationship between Jeliza-Rose and Dickens while Dell embalms Noah’s corpse.

Tideland is surprisingly macabre with the corpses embalmed like the family in Texas Chainsaw Massacre. In this sense Gilliam’s film is very visceral and different from anything he has previously done. There is one thing about Gilliam and that is not believing that there is any such thing as impossible. That is evident throughout his career in such films as Time Bandits (1981), Brazil (1985) and The Adventures of Baron Munchausen (1988) with a seeming no such thing as impossible attitude in his films and filming what others perceive as unfilmable. Tideland is based off the equally bizarre novel by Milton Cullin. Bridges part is a joy as he seems to be an even more washed up version to his Dude character in The Big Lebowski (1995). But it is the young Ferland who steals the show and is a natural as the girl among some very uncomfortable aspects of the story.

There is an aspect to the film that stops short of being further controversial and that is the relationship between Dickens and Jeliza-Rose. Dickens appears to be an innocent while Jeliza-Rose is sexually aware. There is a scene where Dickens shows Jeliza-Rose how to kiss, clearly learnt by some past family secrets while he also has a passion for blowing things up. Although older than J-R, Dickens is many senses her equal in his imagination. We can only hope that Jeliza-Rose will grow up unmarked by her upbringing to this point and go on to live a normal life.

As is usual with Arrow Video there are many extras on the disc, mostly composed of Making Of documentaries, including several interviews with Gilliam, Bridges and producer Jeremy Thomas and special-effects featurettes.