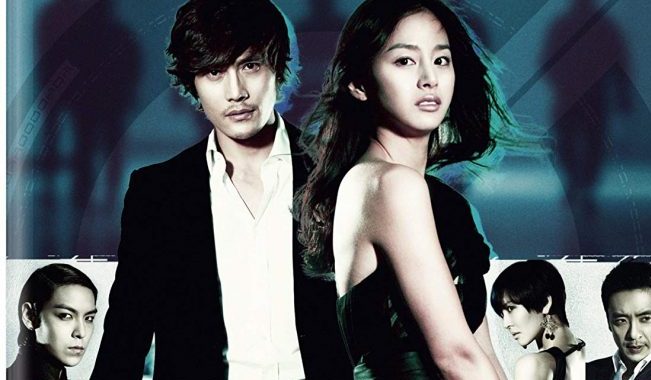 ‘Iris’ is a hugely successful TV series in South Korea that begun begun transmitting in 2009. If you imagine ‘CSI’ and double the success of that show, you’d have some idea of the success of that show in the country with almost a third of the country having tuned in to watch it. While there have been a handful of films to come out of South Korea which have directly dealt with the tensions between South Korea and the unresolved war with its hostile neighbour in North Korea, very few have been seen outside the native country. Naturally it seemed like a good idea that ‘Iris’ should be followed by a feature length version. Iris: The Movie (2010) expands on the themes and the storyline from the TV series, editing much of the TV series into the film.

The premise of the film focuses on the NSS (National Security Service) who work as a Black Ops organization to disturb North Korean action and interference. The NSS are attempting to disrupt North Korean terrorist activity and their nuclear ambitions. The men and women in the NSS are trained to be cold blooded James Bond type figures with a license to kill. Working and operating in Hungary an NSS operative on operations there, Kim Hyun-jun (Korean star, Lee Byung-hun) makes the cardinal but natural sin of falling for a fellow operative, Choi Seung-hee (Kim Tae-hee) , setting him up against his old friend, also working in Hungary with him, Jin Sa-woo (Jung Joon-ho). When Hyun-jun takes out a target in Hungary he is injured trying to escape, but his boss does not arrange for his escape and instead has him targeted. Sa-woo is sent in to do the job, but Hyun-jun narrowly escapes in an exciting chase sequence leading him to go rogue. Meanwhile, North Korea is plotting a nuclear terror plot in Seoul.

Iris is undoubtedly an exciting action film, if a little confusing in places. It is a film that essentially resembles a good old fashioned espionage thriller but more of the Bourne or James Bond variety than your John le Carre type. The action is slick and is often in your face. However, even in its native South Korea it didn’t get a theatrical release, but instead received a cable/satellite showing (although it was shown theatrically in Japan). This was perhaps not to fool the public in that it edits together episodes and scenes from the TV series. The star of the film is Lee Byung-hun who is one of the biggest stars in South Korea having starred in Park Chan-wook’s Joint Security Area (2000), Chan-wook’s section in the anthology, Three Extremes (2003) and in A Bittersweet Life (2005). He has also starred in several big budget Hollywood films including the G.I. Joe films, RED 2 and Terminator Genisys (both 2013).

The picture quality in this film, mostly shot in blue grey tones with some great location work in Hungary (a favourite location for espionage cinema), as well as South Korea is superb and very sharp in both High and Standard Definitions. Some of the CGI in some parts is a little obvious, however. Elsewhere the stunt action work is also very well done (nothing unusual there in a South East Asian film). Unlike many 88 Films releases, this latest offering in the Asia Collection doesn’t have any extras but is attractively presented in a slip case.