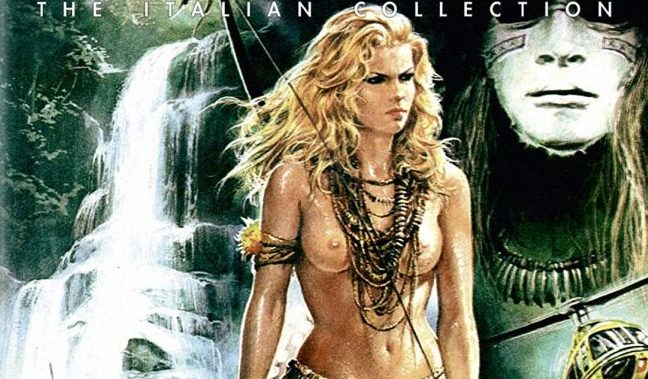 Of course for any fans of Italian popular cinema, exploitation or so-called video nasties, it will come as no surprise that the cannibal exploitation films bought a whole series of horrors films that begun with The Man From Deep River (1972, also released in the Italian Collection by 88 Films) and went through all sorts of nasties such as Cannibal Ferox, The Mountain of the Cannibal God (1978), the most influential of them all, Cannibal Holocaust, Cannibal Ferox and The Devil Hunter (all 1980). By 1985, the cycle was coming to an end with Amazonia: The Catherine Miles Story (1985) was one of the last of these films. And to underscore this, there is a fantastic 51 minute documentary that goes through the history of the cannibal exploitation genre from its origins and the controversy surrounding Cannibal Holocaust with a particular focus on those final cannibal films from 1985: Amazonia, Massacre in Dinosaur Valley and Cut and Run, the latter starring the iconic Hills Have Eyes (1978) star, Michael Berryman before the final film in 1988, Against Nature, sometimes as Cannibal Holocaust II (as well as The Green Inferno. Amazonia is also sometimes known by the misleading title Cannibal Holocaust II). The documentary includes interview with 88 Films own Calum Waddell as well as other film historians, John Martin and Mikel Koven, Blair Witch Project (1999) director, Eduardo Sanchez, the director of many of these genre films Ruggero Deodato and Italian exploitation actor star, Michael Sopkiw.

Sometimes known as White Slave and released in Italy as Schiave blanche – Violenza im Amazzonia, Amazonia is a little more accessible than say the sick Cannibal Holocaust. The film tries to frame the story as though based off a real life case, to the point the opening titles tell us “The Producers wish to thank the Criminal Court of Ciudad Rodaz for allowing them to consult the records of the trial.” The truth is this is not based off a true story as this is pure fiction. Catherine Miles, an English girl missing for many years is on trial for the murder of two people. She tells her story from her privileged education in London to how she ended up traveling up the Amazon with her mother and father on a barge. Suddenly they are attacked by natives with blow pipes killing the parents. While Catherine is in a paralyzed state, she witnesses the natives cutting off their heads. A dazed 19-year-old Catherine travels with the hunters back to their camp. Spending most of the film mostly naked (which should please approximately 50% of the viewers), the girl is reluctantly integrated into the camp, is exposed to being sold to the highest bidder, de-flowered (most of the native girls have their hymen broken at the ago of 4 we are told) and learns to adapt to survive. Meanwhile, the rotting heads of her parents hang near-by). Catherine’s equal hatred and respect for Umukai, the head warrior who killed her parents grows while all the while she plots her revenge.

There are several aspects of this film where it is disingenuous to call this a cannibal film. Yes, there is much in the way of mutilation and splatter one would expect from an such a film, and this one is no exception (in fact this 88 Film release is complete from previously cut versions), but the tribe are headhunters and not cannibals and is more accessible than some of its more notorious predecessors. Shot in such locations such as Colombia and Florida, the film does have the usual lush look to it expected of this sub-genre (even more so in this 2K transfer) and it also has some of the usual pretense at reality. Instead of flirting with snuff movies though, this one tries to convince us that this is based off a true story.

As for the films star, French actress Elvire Audray plays the Catherine Miles character. Audray was an aspiring actress, model and even singer who formed a career that never really took off. Her performance is marred by terrible dubbing, whether viewed in Italian or English. Same difference. Nevertheless it is a key role for any fans of the cannibal exploitation film. Sadly Audray committed suicide in 2000 and so does not appear on any extras on the disc. As well as the wonderful documentary on the last days of the cannibal film, there is an interview with cameraman Federico Del Zoppo who tells some amusing stories of working with Burt Lancaster. Another significant extra is the accompanying booklet with an interesting contextualising essay by 88 Films own Calum Waddell who focuses on the life and career of Audray. Attractively packaged as ever with a limited slip case illustrating, the German poster art for the film and the original Italian as a reversible option.