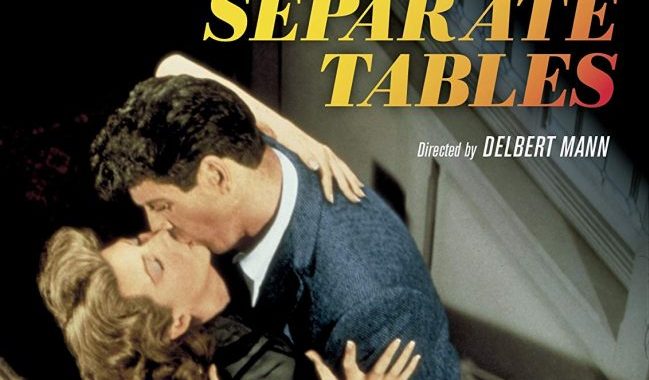 Separate Tables (1958) is a studio based drama that deals with loneliness. It was also quite a daring film for the time, dealing with issues such as perversion that flies in the face of the moral code still extant at the time. The film was also nominated for 7 Academy Awards including Best Picture, Best Actress (Deborah Kerr), Best Adapted Screenplay and won two, Best Actor (David Niven) and Best Supporting Actress (Wendy Hiller). On the commentary track for the film by director Delbert Mann, he states that the film is often considered a British film when it was screened at a festival for British films. Yet the film was made by United Artists and despite being set in Bournemouth, was shot entirely on a Hollywood sound stage, although of course some of the cast are British.

The film doesn’t truly break away from Terence Rattigan’s original 2 act play and does feel somewhat stage bound. Set over one night, it informs us at the beginning that these characters staying at the Bournemouth boarding house, the Hotel Beauregard are a mixture of lonely characters. We are first introduced to the nervy Sibyl (Deborah Kerr) sitting on a bench one evening near the hotel. She is approached by one of the other residents, the charming Major Pollock who clearly has a shine for Sibyl. Sibyl is the daughter of the fussy Mrs. Railton-Bell (Gladys Cooper) one of the more dominant residents of the hotel with Sibyl living in fear and subservience to her mother. The Major is known and tolerated by the other tenants as something of a fibber exaggerating his war tales.

The other guests include the meek Mr. Fowler (Felix Aylmer), a washed up and bitter American writer and heavy drinker, John Malcolm (Burt Lancaster, whose company, Hecht-Hill-Lancaster, produced the film) and a new guest, a glamorous former model (Rita Hayworth) who also happens to be his old flame. Each of the character’s, as the play/film’s title suggests live isolated and in a state of loneliness in this old fashioned Victorian boarding house run by philosophical spinster, Pat Cooper (Wendy Hiller). Matters come to a head for the tenants when the lies of the Major are exposed and had been reported in the local press of having been arrested for molesting girls in a local cinema.

Indeed this aspect of Rattigan’s play translated to the cinema was a brave move that would never have flown with the conservative censors before, even with the BBFC in the UK. Mann’s direction stops short of being soapy, but the melodrama is strong with this one. Meanwhile, Niven’s character, while this is one of the key roles in his career and somewhat disguised behind a handlebar moustache, he does seem something of a parody (probably a role improved with the ‘Fawlty Towers’ Major character) and it’s just saved by the fact that the Major turns out to be a fraud in the first place.

There are undoubtedly some strong performances here by some big names with the support giving some equally strong performances, yet they never truly break away from their caricatured roles. The extras that accompany the disc are fairly minimal for a BFI release, although there is an engaging commentary on the film by Mann recorded before he passed away in 2007. Of course Mann, a director that emanated from TV drama and had previously directed the brilliant Marty (1955) is engaging and frank in the commentary, still expressing his disapproval of the producers including the rather kitsch Vic Damone title song at the opening that kinda works, but it is equally understandable Mann’s disdain for it. The only other significant extra other than booklet with essays is a recording of a (audio only) Guardian interview with Lancaster from 1972.