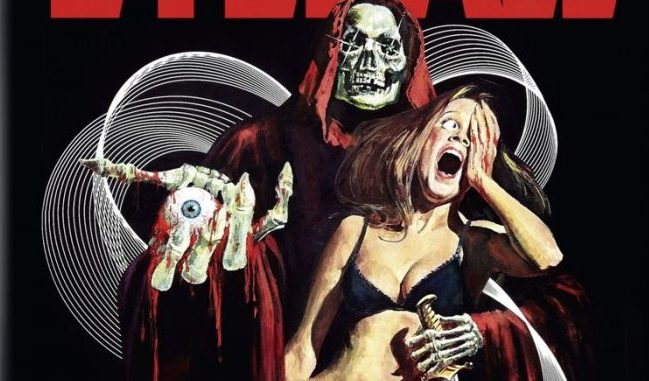 Umberto Lenzi’s giallo thriller Eyeball (1975) (Italian title, Gatti Rossi im un Labirinto di Vetro) is the most ambitious and complete disc set in 88 Films Italian Collection yet. Title number 45 in the series, as well as packaged in an attractive limited edition slip case featuring a design of an original English language poster and a host of extras; there is also a set of 4 stiff postcards depicting lobby cards and a glossy 36 page booklet, making for a very complete disc set presenting excellent value for money. But there is more to this release than a random release of a giallo thriller. Last year Lenzi passed away and this release honours this still relatively untapped Italian director of euro exploitation films who, although not up there with the likes of Dario Argento or Mario Bava, was stil a highly prolific filmmaker looked at here in great detail.

Lenzi, as Calum Waddell points out in the accompanying essay to the set, is often considered a journeyman director. He made many giallo thrillers and this was just one of many he made through the 1960s and 70s. It has all the normal tropes of a giallo: exotic Euro locations, a gloved killer seen through POV camerawork, suspense, MacGuffins, a typical euro exploitation soundtrack similar to Ennio Morricone (here by Bruno Nicolai), poor dubbing and a slasher sensibility. It is also sexier and more erotic than many others in the genre, something Lenzi was known for in his films without being overly sleazy. We are introduced in quick fashion to the characters of the story and to the intended victims. They are on a tourist bus in Barcelona and all work for the same American company. One of the party, Paulette Stone (Martine Brochard) is joined on the trip by one of her associates whom many assume is her lover, Mark Burton (John Richardson, best known as the bewhiskered caveman boyfriend of Raquel Welch in One Million Years BC, 1966 as well as having appeared in Bava’s Black Sunday, 1960).

Shortly after a stop, one of the party are killed in a park just off Las Ramblas. Following this a young girl is also killed and both bore the same trait, brutally stabbed with an eye gouged out. Initially suspicion falls on the creepy bus tour conductor who has been tormenting the young girls on the tour. He is arrested by the investigating police inspector. Before long the body count starts to rise further and throughout suspicion falls on one or another in the party . Burton begins to suspect that it’s his ex-wife who is the chief suspect as she had once been found unconscious by a pool with a knife in one hand and a gouged out eye in the other, but of course we know that this is too obvious to be true.

In recent years, thanks to distributors such as 88 Films in the UK, as well as Shameless Entertainment and Arrow Video, the Italian giallo is getting a well deserved re-evaluation in the canon of cinema and moving it beyond merely specialist territory, allowing for new audiences to access these films. The packaging here mostly focuses on Lenzi himself and stands as a rightful re-evaluation of the director’s extensive ouevre. He was a director of genre work, including giallos such as this one, but his most notorious effort was Cannibal Ferox (1981), but it is his giallo work that he is best know for. As Lenzi himself says on a 2016 interview included on the disc, he didn’t think that Eyeball was his best film or as good as the ones he made in the 60s such as Paranoia (Orgasmo) or So Sweet… So Perverse (both 1969).

Have I said already how handsome this package is? Extras on the discs include a recent interview with Brochard, an actress who only featured in this one film for Lenzi who discusses her retrospective view of the film and its making. There is also a feature length documentary, ‘All Eyes on Lenzi’ that covers the directors vast career in its entirety from the horror and giallos to the police action films starring Thomas Milian and his later films. This documentary is as good and thorough as the cannibal docs on previous releases by 88 Films, here featuring interviews with Lenzi himself, 88 Films own Calum Waddell, academics John Martin and Mikel Koven, as well as actors such as Danilo Mattei who appeared in Cannibal Ferox and Ironmaster (1983) for Lenzi and most interestingly of all, Giovanni Lombardo Radice who talks about how much he detested acting in Ferox and his disdain for Lenzi. No love loss there apparently.

Okay, this is a pretty standard giallo as these sort of films go and is actually pretty silly in places with the standard overall look of a Lenzi giallo, an episodic plot and preposterously a tour group that continues despite the increasing body count. Nevertheless we can look forward to the upcoming release of Nightmare Beach (1989), also made by Lenzi soon to be released by 88 Films.