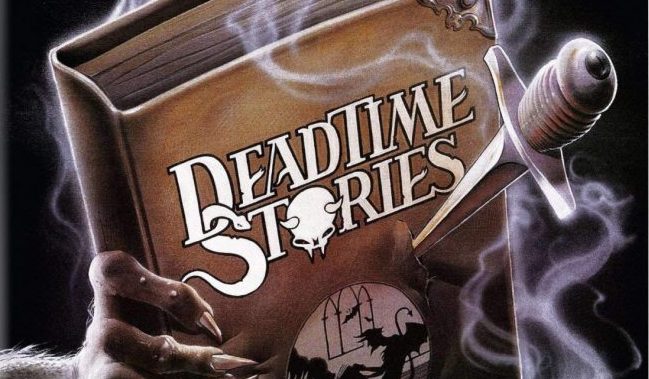 Calum Waddell highlights in the essay in the booklet accompanying the disc, that following George A. Romero’s cult and commercial success with Creepshow (1982) there was a brief period of anthology horror films, a genre that seemed to have leant itself to multi-story films. Deadtime Stories (1986) (sometimes known abroad as Freaky Fairy Tales) was one such film, albeit a much lesser offering. Like most anthology chillers it has a linking story thread, which here has an uncle trying to get his young nephew to sleep who is demanding a bedtime story, so to get the boy settled he reads three fairy tales as horror stories.

The first is a historical witches piece, ‘Peter and the Witches’ which has Peter (Scott Valentine) in among a coven of killer witches in the Black Forest who bring the decayed heart of his dead sister alive into a rotten decayed creature. This is followed by ‘Little Red Runninghood’, bringing the Grimm fairy tale into the modern world with a Howling like werewolf stalking the red tracksuited Rachel (Nicole Picard). The final story, ‘Goldi Lox and the Three Baers’ is the zaniest of them all. Again set in the modern day (and filmed in and around the director’s own house), psychotic killer Goldi Lox (Cathryn de Prume, who more recently appeared in Wild, 2014, with Reese Witherspoon) breaks into the home of killer thieves, the Baers and is every bit as trashy and evil as them.

Unfortunately Deadtime Stories is no Creepshow and more so it is no Amicus film, the popular rival to Hammer films in the 1960s, films which were both stylish and entertaining. As Waddell also noted, Mario Bava’s Black Sabbath (1964), as well as films not mentioned by horror expert Waddell, the Ealing Dead of Night (1945) and the Amicus film, Dr. Terror’s House of Horrors (also 1964) were the early exponents of the horror anthology. There was a flurry of Creepshow copycats in the 1980s that of course included the ever popular Twilight Zone: The Movie (1983) (which was not as good as the original TV series) but brought together such big names as Joe Dante, Steven Spielberg, John Landis and George Miller, as well as other films such as Nightmares (also 1983, recently released by 101 Films) carrying through the 1980s with From a Whisper to a Scream (1987) and After Midnight (1989). The endurance of the anthology horror is still with us today with such horrors as V/H/S (2012) (and subsequent sequels) and Tales of Halloween (2015). One of the potential problems with anthologies is they can be patchy and inconsistent with the best of them, more so with these later films with as many as 7 and 10 stories respectively in each film.

Deadtime Stories is more than inconsistent, overall it looks more like a student project and its low budget is clear with the acting, editing and writing well below par. This looks all the more obvious in this restored version of the film. What is effective though are the horror spfx. Many of them are simple and effective, without being cheap looking, especially in the first sequence of ‘Peter’ with an effective crawling hand and the growing together of the visceral skeletal corpse. Decomposed corpses also make an appearance in the ‘Goldi Lox’ story, a sub-plot of which verges on Nekromantik (1987).

This anthology horror re-emerging from the vaults of the VHS era of cheap horror films is the 8th title in 88 Films Vault series that have previously included Creepozoids and Street Trash (both 1987). The extras on here are all delivered by the film’s director Jef Delman. Delman enthusiastically talks about the making  the film in a featurette, how he made it on a cheap budget in the age of the VHS, how he overcame some of the challenges the film presented, the music he made and provided for the film himself (that has something of a Richard O’Brien tinge to it) and how he overcame the low budget to provide some of the interesting gore effects. Delman also adds a commentary throughout the film and discusses the deleted scenes in another small featurette, as well as there being an alternate cut of the Black Forest sequences. There is also an attractive reversible sleeve for the disc.