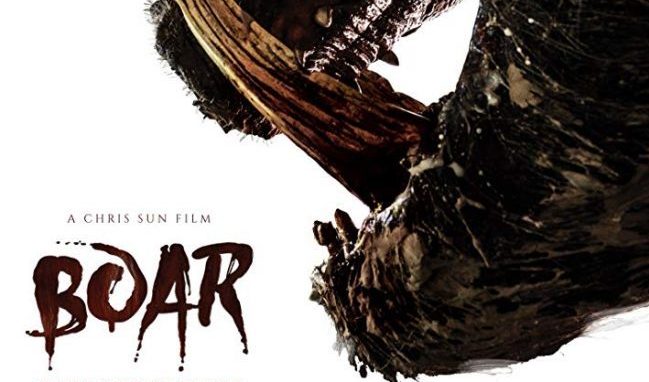 Boar (2017) was screened at the recent Arrow Video FrightFest in London and is the latest in a long tradition of creature features with slightly larger than life creatures attacking people in their habitat. Of course although this had been a feature of movies for years going back to The Birds (1963) and even King Kong (1933), it was Jaws (1975) that made this more commonplace and was followed by many-a-copycat film, mainly a slightly oversized creature inexplicably eating humans. Those imitators included Grizzly (1976), Kingdom of the Spiders, Orca – the Killer Whale (both 1977), Piranha (1978) and Alligator (1980) among others, not to mention a whole bunch of Italian exploitation copy films. In more recent there have been a resurgence of these movies reappearing, even if they have been realised in less than adequate CGI. These include Anaconda (1998), Deep Blue Sea (1999), Rogue (2007) and most recently The Meg (2018). Boar is another new offering to that canon.

An Australian film made by Slaughter FX and Ozpix and directed by Chris Sun, a director who has made a small handful of Aussie outback horrors including Charlie’s Farm (2014). Boar makes good use of its colourful Australian outback types, the outback itself and its subject. It never takes itself too seriously and has a good deal of wit in the script without lurching into comedy. As a film of this sub-genre it is constructed as a very standard creature pic and opens with a couple driving through the outback at night when they become lost. They suddenly see a litter of small boars running across the road when their car is rammed by something large.

Boar is set in the small outback town of Kadunga where grizzled old boys joke about their mates and where life revolves around the local pub. A family turn up in town, with the usual dysfunction you’d expect, Dad (American actor Bill Moseley), Mum, daughter Ella, her younger teen brother and Ella’s crude boyfriend, Robert. They have traveled from the city to stay with Mum Debbie’s ‘built like a brick shithouse’ brother Bernie (Nathan Jones). Jones is a former strongman and WWA champion wrestler who makes Dwayne ‘The Rock’ Johnson look weedy. We can predict at some point there is going to be a showdown with the giant pig killing people and Bernie.

Meanwhile other folks are under attack including campers who are found gorged by something big which leaves a mass of bones and a bloody mess. The bodies are discovered by a couple of old grizzled hunters, including Ken (John Jarrett, appearing in a very different role to his usual sadistic killer Mick Taylor in the Wolf Creek films). Ken comes across as your rugged Aussie type, but plays against type when he finds the upsetting mess of bodies he finds at a camp. Of course, although he has a rifle, he only has one bullet. When Ken doesn’t come home, his feisty daughter and local pub owner Sasha (Melissa Tkautz) is concerned and thinks this out of character and goes looking for him herself. The family, led by Bernie also make their way to the outback, setting them all up for a live or die confrontation with the large killer boar.

Of course, not mentioned above is the most obvious predecessor to Boar, the 1984 film Razorback that, while the plot essentially differs can be read as if not a remake than a fresh realisation of Razorback. Sure, this film is hardly original but is none the less very entertaining with some great lines and characters. Moseley as the Dad is one of the weakest characters with his faux pep talks with his future son-in-law before he is killed off while Tkautz and Jarrett add some outback entertainment. Some of the smaller characters have some good lines too, while Jones’s character is a little quirky and not all gentle giant, adding his own brand of Aussie banter. There is an effective mix of special-effects and CGI but ultimately is overly familiar as a plot construct.

The film was shown at the Arrow Video FrightFest 2018 and will be released on DVD in 2019.