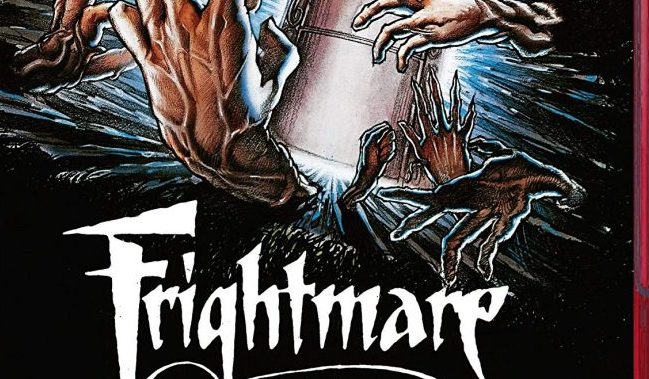 In a recent review for another Troma Entertainment release by 88 Films, the colourfully titled Surf Nazis Must Die (1987), I wrote about how Troma films were released as quickie B movies akin to the factory of B science-fiction and horror films, along with teen hot rod movies and westerns that were quickly churned out by Roger Cormon’s drive-in B movies. Frightmare (1983) is the latest release by 88 Films in their Slasher Collection (# 38). This film rings even truer in its resemblance to Cormon’s films, as it not only references and parodies classic horror movies, especially the B movies, but also pays homage to them.

Frightmare stars the English-German actor, Ferdy Mayne. He is perfectly cast here as the ageing and elegant “Prince of Ham”, Conrad Ragzoff, a cape wearing tall, dark and handsome horror star of old horror movies. Mayne most famously played the vampire count in Roman Polanski’s The Fearless Vampire Killers (also known as Dance of the Vampires) (1967) and had also appeared briefly in a Hammer film, The Vampire Lovers (1970). Ragzoff is an actor revered by film students and are saddened when he suddenly dies, not long after he has murdered his agent (Leon Askin, the actor who played the portly General Burkhalter in the WWII set comedy series, ‘Hogan’s Heroes’). Ragzoff is buried in his cape and Gothic dinner suit, much like Bela Lugosi. He also leaves a series of video eulogies, hamming up his final role, as he had apparently done with his films.

After he is buried some of his student fans steal his coffin from a mausoleum and run off with it for a farewell party. They unearth Ragzoff and have his corpse appear at their party. That night curiously an occult seance wakes up Ragzoff while the students sleep and he proceeds to kill them off one by one. The students are killed off with the usual slasher deaths: tongues pulled out, immolation and an Omen style head lopping. The gore effects for the film are actually very well done (unlike the rubbery effects in the Troma studio’s Toxic Avenger films).

There are many horror movies referenced in this film. In a scene from one of Ragzoff’s supposedly earlier films is actually a clip from a little seen Christopher Lee film, the Italian Uncle Was a Vampire (Tempi duri per i vampiri) (1959) with fans cheering ‘Ragzoff’s’ performance. Mayne’s character, more a spitting resemblance to Mike Raven, albeit older, in Lust for a Vampire (1970). Mayne deliberately camps it up à la Vincent Price; indeed, in many ways Mayne seems to be a budget Vincent Price. The plot itself has other points of references in the plot, specifically Price’s character of Paul Toombes in Madhouse (1974) and one of the stories in the Amicus compendium, The House That Dripped Blood (1970) in which a hammy actor (Jon Pertwee) buys a cloak for a vampire role which turns him into a real life undead vampire. References to classic horror run through the film, in some cases recent horror such as Phantasm (1979) (dry ice and cemeteries etc.) and horror movie posters on the wall of the student house (supplied by ‘Famous Monsters of Filmland’ editor Forrest J. Ackerman). Even some of the deaths has one girl being crushed by a coffin while wearing a good old fashioned white nightie rather than skimpy knickers.

Made on a low budget for a mere $120,o00, it does pre-dated Fright Night (1985) by a couple of years and, a film that cleverly referenced classic horror films with Peter Vincent (Roddy McDowall) mourning the passing of the greats. In Fright Night Peter Vincent is outed as a fraud, whereas Ragzoff here is the real deal, in fact his character is pure evil. Unusual for a slasher there is rather more of the Gothic about it, including the omnipresent sound of heavy breathing and screeching strings.  The title may even sound familiar (but it probably gets confused with the same title of Pete Walker’s 1974 classic indie horror from Britain).

Troma films have launched careers of the occasional big name, but other than Mayne, the only one here is Jeffrey Combs who was able to ham up a performance in his own big horror film, Re-animator (1985). Here though this Troma film comes on a fine looking 2K scan – undoubtedly the finest this film has ever looked. Take your pick of the commentary tracks that give way more insight into the film. There are commentaries by fun lovin’ slasher experts, The Hysteria Continues which is well worth a listen for their expert knowledge alone, an audio track played over the film of an interview with the films director, Norman Thaddeus Vane, as well as a commentary by film historian David del Valle and David DeCoteau (who had directed Creepozoids, 1988, a recent release by 88 Films). If that’s not enough there is an additional commentary track by the Mondo Digital team of Nathaniel Thompson and Tim Greer. Furthermore, there are a couple of other extras on the Blu-ray disc, including a recent interview with Scott Thomson who plays the character of Bobo and talks about his experience on the film and cinematographer, Joel King who gave the film that look of a mix between an old horror film and an MTV music, as he talks about the highs and lows of his own career.

The film comes with the usual attractive poster cover and an even better slipcase, showcasing the sword and skull coming out of the grave alternate poster for the film, as well as a reversible sleeve artwork illustrating the films poster of its alternate title, The Horror Star. There are also sleeve notes for the film with an essay by Motty Budrewicz and Dave Wain.