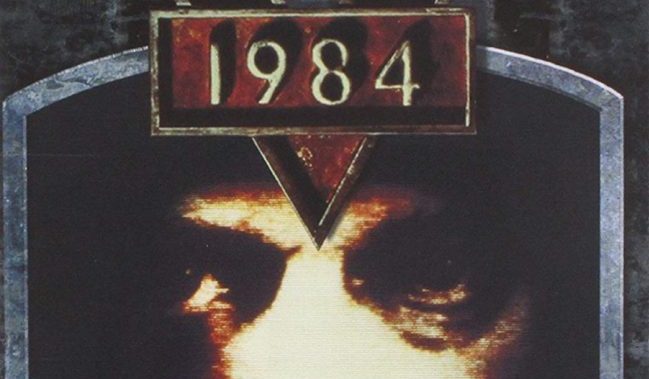 Big Brother is watching you! The timing of a release of any film adaptation of George Orwell’s classic dystopian novel about a totalitarian state never seems to lack relevancy. Indeed the book becomes more relevant as time goes on. Written in post-Word War 2 1949, ‘1984’ became an instant classic, but one that has often been perceived as the writing of a ‘leftie’. It was made as a less than successful version as an Anglo-American production in 1956 and prior to this in 1953 as a TV production starring Peter Cushing as Winston Smith. Michael Radford’s 1984 adaptation of Orwell’s story was given a make-over for Thatcher’s Britain and once again seemed a timely reminder on how governments can control its subjects. At the time the Left particularly were concerned by the growing authoritarianism of the Thatcher government and the increase in CCTV being installed throughout the UK. Little surprise, especially given the year it was made, that Orwell’s novel was ripe for a re-vamp.

The story follows Winston Smith (John Hurt) who is searching for something different. Winston works as a functionary Outer-worker for the Ministry of Truth, editing history and facts, or rather censoring in the totalitarian superstate of Oceania. Smith lives and works in Airstrip One, former London in the greater state of Oceania. Privately Winston keeps a diary as well as having private thoughts, fearful of the Thought Police and evidence emerging of his “thoughtcrimes”. Winston meets and begins an illicit affair with another worker, the free-spirited Julia (Suzanna Hamilton) and as a result risks arrest and being taken away for treatment (in the dreaded Room 101). The pair meet up and rendezvous in an (artificial) countryside location where they have their first sexual encounter and fall for each other, even though romantic love is forbidden. Their relationship is under threat of being uncovered by the Thought Police who will rehabilitate him in the contrary named Ministry of Love. An inner state Inspector O’Brien (Richard Burton) investigates.

Many have labelled this as one of the bleakest films Britain has made, even though there have been other British examples of dark dystopian futures including such modern classics as Brazil (1985) and Children of Men (2006). True or not, the novel, some of its tropes and names have become ingrained into everyday speak or into the political lexicon: Big Brother, thoughtcrime, Ministry of Truth etc. Big Brother is perhaps less prevalent in this film than in the novel, yet nevertheless is omnipresent as a black and white figure on the screen, sinisterly leering out. At the time of its release some critics found the film to be too bleak to be entertaining, but in hindsight and viewing the film again it is entertaining, and powerful, although with some clear differences between the novel and this film.

Directed by Radford, who later made the Italian proletarian love story, Il Postino (1994), he gives a smart fresh look to 1984. It is also brilliantly acted. Hurt is perfectly cast as Winston Smith, as his etched lined face show up all the struggles of his inner conflict. Equally, Burton, in his final role is as good as he ever was as O’Brien the State apparatchik (and surprisingly shows much restraint); indeed the film is dedicated to the memory of Burton. Meanwhile Hamilton who plays Julia is, despite being a prolific actress less well known but is well cast.

Aesthetically the film looks good too, shot in retro utilitarian brown tones and showing a good deal of footage at the advances in a perpetual war that Oceania is undertaking with its constant projected images from World War II and the Korean War it helps perpetuate the lie that the workers must get behind the state for the protection of the future. The people seem to be absorbing the lies en masse. The look also resembles another of the great dystopian science-fiction films, Fritz Lang’s Metropolis (1926). Aesthetically, they look similar with large crowds of workers and functionaries and an overall retro industrial look, although the sentimental denouement of Metropolis gives way to a much bleaker and darker ending in Orwell’s novel/Radford’s film. I hope that this film avoids ending up in Room 101 as it does deserve a wider audience in these uncertain times.