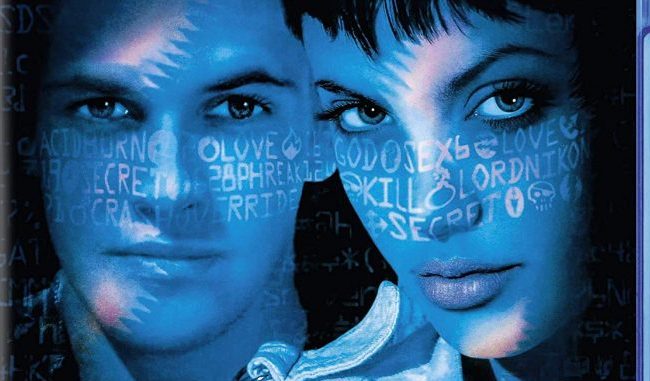 Cyber security is almost a daily news item these days, whether it is the concern of state sponsored cyber attacks coming from Russia or North Korea, some spotty oik in his basement hacking into the Pentagon or criminal gangs accessing websites and threatening to expose protected data.  Corporate companies are constantly attempting to stay ahead of the game and failing. These days cyber security companies hire hackers to take part in hackathons with great rewards for those who can hack into a cyber security system and are rewarded with a high paid job. Hire a thief to catch a thief if you like. Even as far back as 1983 War Games had a high school kid hacking into the Pentagon and almost threatens World War 3. As naive as much as the delivery off the story is, it never the less looks far fetched today. Taking an extra step into (virtual) reality, the 1995 film by Iain Softley, Hackers (1995) again sees computer systems and particularly individual high school hackers breaking into corporate security systems.

Made 23 years ago computer hacking was a relatively new phenomenon and was not as embedded in popular culture as it is today. Nevertheless it existed as a sub-culture. The film opens in 1988 with 11-year-old Dade Murphy convicted of crashing over 1,500 computer systems, his parents receive a fine of $45,000 and banned from using a computer until he is 18-years-old. Jump forward and 18-year-old Dade (Jonny Lee Miller) has moved with his divorced mother to New York and a new school. He acquires a new computer and still manages to hack into a TV channel to change to a program he wants to watch (‘The Outer Limits’ – fair enough).

At high school he meets other geeky computer kids into hacking, including cool sort-of-punk girl, Kate Libby (a young Angelina Jolie) who he develops a love-hate relationship with. (No prizes for guessing what develops between these two.) They observe him hacking into the school system, he beats the unchallenged Libby at her favourite computer game and to get his own back on her programs the school’s sprinkler system to be set off. All these guys have their own online handles: Dade’s is ‘Zero Cool’ and Libby’s ‘Acid Burn’ (geddit, ‘Crash’ and ‘Burn’). One of these friends, Joey (Jesse Bradford) is a novice and cuts his teeth by hacking into the system of a corrupt mineral corporation, that threatens to damage the company with ‘garbage’ files. The company’s cyber security manager, himself a former hacker, is the odd and slightly sinister Eugene ‘The Plague’ Belford (Fisher Stevens) who manages with the FBI to find the location the hack has come from. Joey is arrested, but Belford suspects that he has had help and focus their attention on Dade with his criminal record. True, Hackers looks only slightly dated, but  remains a fascinating if not altogether accurate film about this sub-culture and a more believable than War Games or Swordfish (2000), even forgiving some of the exaggerated quirky characters. Its look at teen hackers is kind of typical of on how adults view teenagers. As unrealistic as teenagers are depicted in such films as Rock Around the Clock (1956), so it is with Hackers. There is though a deliberate post-Punk Cyber Punk look to many of the characters. Very PostModern if you like. British actor Miller, fresh from Trainspotting (1994) (then 23) and a young Jolie (20-years-old at the time) star while camp hippie ‘Cereal Killer’ is played by the always irritating Matthew Lillard. Miller and Jolie went on to have a 4 year relationship after this film. However, there is a great deal of insight that runs through the film and accuracy from the real hacking sub-culture in the film (including the ‘Hackers manifesto’). Therefore, the film is technically accurate with director Softley embedding he and his cast into this sub-culture and employing the language and detailed events of hacking.

Visually Softley has been able to make the film exciting, visualising computer language, inserts skateboarding culture into it. He refused to use CGI and it does have something of the Tron look to it, some of which looks a little dated and of its time, but is still better than the computer graphics available on home computers at the time. He depicts computer language as perspex towers and electronic boards as a kind of city. This is effective for its age and does mostly succeed in creating a visualisation of computer language and network. More successfully than the awful animated The Emoji Movie (2017). This was British director Softley’s second feature after making Backbeat the previous year, a biopic of John Lennon’s relationship with artist and The Beatles’ bass player, Stu Sutcliffe. He approached this film very differently, but music is still very present and an important driver for the film. Like Trainspotting it pumps through the film with music provided by Prodigy, Underworld (again), Orbital, Urban Dance Squad, Stereo MCs and Massive Attack. As well as a soundtrack album, it was also followed by a number of ‘inspired by’ compilation albums.

This represents a very different and diverse release by 88 Films. Presented in their consistent high quality packaging with a limited edition slipcase, there is also an A3 sized foldout poster of the film and a reversible sleeve. Beautiful to look at in Blu-ray with the options to be watched in stereo or surround Stereo 5.1. The two significant extras on the disc are the interesting and in places technical commentary by director Softley and that media doyen of film criticism, Mark Kermode, who has been an advocate for the film since its release. Kermode also contributes to the interesting and thorough hour long documentary of the film, ‘The Keyboard Cowboys: A Look Back At Hackers’ which looks at the overall look of the film, interviews with director Softley, the technical crew, those involved in the hacking world and actors Lillard and Stevens.

Hackers is a film that has been forgotten over time, but it’s re-release is timely, even if some of the film is of its time and in other ways ahead of its time, which might explain why it was dismissed by many on its first release. It’s not the early film that Jolie (her second) is best known for and set her on the course of her Lara Croft tough woman image. Defo worth watching the accompanying documentary that looks at the films development, the culture it stems from and its influences.