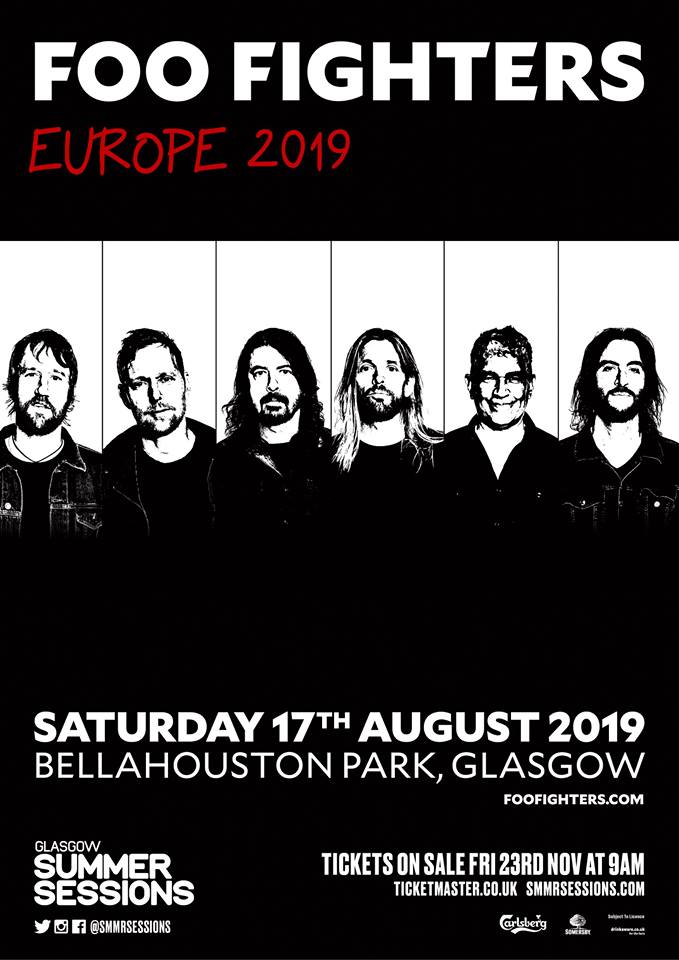 Glasgow Summer Sessions have today announced the festival’s second headliner for 2019 with the incredible Foo Fighters set to take the stage on Saturday 17th August 2019 in the city’s Bellahouston Park.

Foo Fighters, a band whose live shows are renowned around the world, will play Glasgow Summer Sessions for the first time ever, on Saturday 17th August. Following a run of stadium shows in England in 2018, Foo Fighters will make a welcome return to Scottish soil, ending a four-year absence from the Scottish live scene. Foo Fighters truly never fail to deliver an outstanding live set, showcasing over twenty years in the music industry as one of the premier rock bands of their generation. From classic anthems like ‘The Pretender’ and ‘Everlong’ to their latest rock-heavy releases ‘The Sky Is A Neighbourhood’ and ‘Run’, Foo Fighters have been keeping rock well and truly alive for over two decades, bringing spontaneity and enthusiasm to every show in sold-out stadiums around the world. The eleven-time Grammy Award winners will once again entertain the Glasgow crowd with hits bringing their euphoric, rock-fuelled set to Bellahouston Park for a Saturday night to remember.

Geoff Ellis, CEO of DF Concerts said: “To welcome Foo Fighters to Bellahouston Park for the first time is so exciting for music fans all over Scotland, as they are, to this day, one of the best festival headliners in the world. With their outstanding back catalogue, this is bound to be an unmissable show.

This announcement, as well as the previous reveal that legendary band The Cure will make their return to Scottish soil after 27 years on Friday 16th August, truly cements Glasgow Summer Sessions as an integral part of the Scottish live music calendar for 2019. With more to come, fans should stay tuned for the full line-up!”

The 2019 edition of Glasgow Summer Sessions already looks bigger than ever, with The Cure and Foo Fighters set to ensure the Scottish festival season goes out with a bang.

TICKETS ON SALE FROM 9AM ON FRIDAY 23rd NOVEMBER – WWW.SMMRSESSIONS.COM