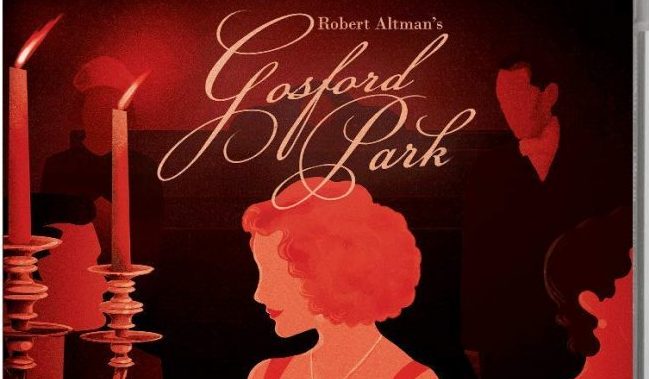 Before there was ‘Downton Abbey’ there was Gosford Park (2002), a kind of ‘Downton Abbey’ with an Agatha Christie whodunnit thrown in for good measure. After all it even has the esteemed Maggie Smith in it. It has all the epitome of British Heritage cinema and made by an American at that. Gosford Park was written Julian Fellowes who, not surprisingly also created ‘Downton Abbey’. In addition it would co-star Dame Maggie Smith, Richard E. Grant and Jeremy Swift. It can be added to Robert Altman’s ensemble pieces that in the past had included Nashville (1974), The Player (1992), Short Cuts (1993) and Pret-a-Porter (1994). On a couple of extras on the film it is discussed how as a director Altman was able to navigate and choreograph the actors across any given scene, giving a perfect example of Altman’s directorial style.

Gosford Park, although an Anglo-American co-production is classic British Heritage cinema. It has that sense of style and manners within this tradition. The film was shot at different locations with exteriors at Wrotham Park and Hall Park, near Beaconsfield. Set over a couple of days in November 1932 it has a group of aristos turning up for the winter pheasant shoot. The wealthy older industrialist and owner of Gosford Park, Sir William McCordle (Michael Gambon) and his estranged and bitter wife, Lady Silvia (Kristen Scott-Thomas) invite a variety of guests for the weekend shoot. Set between the two world wars, this class portrayed were slowly dying out (The Shooting Party, 1985, a fairly similar film was set before the First World War). Among the guests are (real-life) actor Ivor Novello (played by Jeremy Northam) and an American film producer, Morris Weissman (Bob Balaban). All these people are fairly dysfunctional with their problems. But the focus in the film is not these upper-class characters, but really on the below stairs staff who have arrived with their masters and mistresses. In every scene serving staff appear and they are shown relaxing, with their employers, ‘below’ stairs and gossiping. Two of the key staff are Scottish Mary (Kelly Macdonald) and Elsie (Emily Watson), the latter is having an affair with Sir William. The film takes a twisted turn when Sir William is exposed for his affair with Elsie and a short while later is found dead in the study having been poisoned and stabbed in what seems a very Cluedo turn of events. Enter Stephen Fry as the bumbling police Inspector, replete with Jacques Tati like pipe and raincoat adds some light relief.

At 137 minutes, the film is long but very engaging; perfect Sunday evening fair. Released by Arrow Academy, it looks great in its High Definition 2K restoration from a 4K scan, clearly showing off the polished furniture, cut crystal glassware and shimmering costumes. By contrast, the under stairs staff clearly are not wearing make-up and it’s surprising to see the likes of Grant and Clive Owen playing butlers and man servants. Eileen Atkins and Helen Mirren are also superb as the head cook and head housekeeper respectively.

With a cast of 35 main characters, Altman did a superb job with this film and is by a long mile is his best film from his later career and was rewarded with 5 Academy Award nominations and won one for Fellowes as writer for Best Original Screenplay. 17 years later Gosford Park is still highly watchable with the release accompanied by a couple of great archived Making Of documentaries that include a look at how Altman and Fellowes created the authenticity by getting advice from former people in service from the 1930s. As well as deleted scenes and commentaries by Altman, production designer Stephen Altman and producer David Levy and two others by Fellowes and David Thompson. There are also a couple of more recent interviews on the film by executive producer Jane Barclay and another with Natasha Wightman who plays Lavinia Meredith.