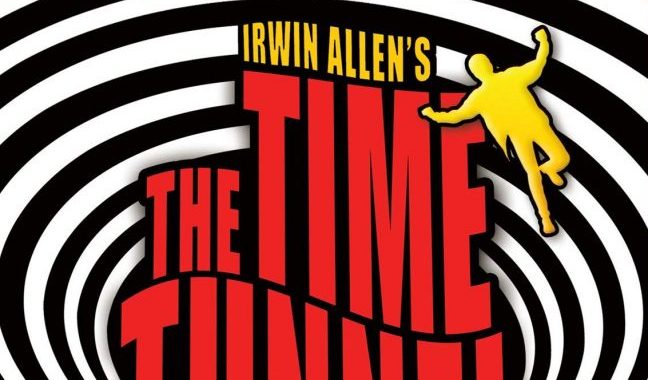 Released by Revelation Films is a box-set of all 30 episodes of the 1960s US TV series ‘The Time Tunnel’. It was created and produced by Irwin Allen. Each episode was approximately 50 minutes long and judging by the High Definition transfer of these episodes was made with relatively high productions values. Allen was one of the key movers on 1960s fantasy TV and his later disaster movies in the 1970s. Along with ‘The Time Tunnel’, Allen also created ‘Voyage to the Bottom of the Sea’ (1964-68), ‘Lost in Space’ (1965-68) and later in the 1970s produced several key disaster movies, The Poseidon Adventure (1972), The Towering Inferno (1974) and The Swarm (1976). ‘The Time Tunnel’ was the third major series he created and produced after ‘Voyage to the Bottom of the Sea’ and ‘Lost in Space’ and continued his pattern for fantasy TV.

There is something soapy about ‘The Time Tunnel’, each episode ends and begins by bleeding into each other. From the first episode (with a strong support cast that includes Susan Hampshire and Klaatu himself, Michael Rennie) we are quickly introduced as to what the ‘time tunnel’ is. An Arizona Senator (former Mr. Bette Davis, Gary Merrill) arrives at Project Tik-Tok hidden in the Arizona desert, deep underground in this secret facility. One of the young scientists, Tony (James Darren) volunteers to enter the time tunnel but is refused. He enters illicitly and finds himself randomly transported back to 1912, finding himself on the S.S. Titanic. The day it sank of course. Recognising the danger that Tony is in, Dr. Doug Phillips (Robert Colbert) goes into the time tunnel to save him. Naturally even though he is armed with nothing more than a newspaper after the Titanic sank, the ship’s Captain (Rennie) doesn’t believe them. At the end of the episode and surviving in the nick of time, Doug and Tony find themselves on a space rocket ready to launch into space, thereby ending episode 1. And so each episode goes as they have adventures in mines, Ancient Greece, Pearl Harbor, Little Big Horn and other significant historical moments. It would seem that the series doesn’t play with notions of changing time that other science-fiction writers have toyed with.

As binge viewing, the theme does become a little repetitive and at times on the HD transfer the viewer can see the cheapish sets. Nevertheless, for the age of the show the quality of the special-effects are good with the first show aired in September 1966 and the 30th episode almost a year later. The Blu-ray box-set released also includes the unaired pilot episode and an extra of non-audio behind the scenes filming. It would be good to see other Irwin Allen and 1960s TV series brought together in one collection. Allen followed ‘The Time Tunnel’ with ‘Land of Giants’, but the earlier show remained more successful.