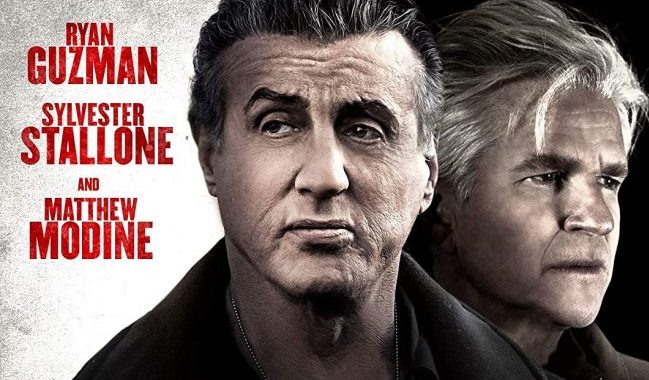 All those action heroes of the 1980s are now in the twilight of their careers, including the mega-stars Sylvester Stallone, Bruce Willis and Arnie Schwarzenegger. Meanwhile, the second tier of action stars of the same decade: Jean-Claude Van Damme, Dolph Lundgren, Steven Seagal and Wesley Snipes have been reduced to straight to network, download and DVD releases. The same is also happening to Messrs. Stallone, Willis and Schwarzenegger (although the latter has slowed down his output in the last few years) as their films seem to be wash, rinse and repeat versions of some of their better known roles and films. (To add to this list can also include John Travolta and Nicolas Cage.) The latest from Sylvester Stallone is Backtrace (2018), a low budget, but nevertheless enjoyable crime thriller.

Backtrace has at the centre of it a conceit regarding a bank robber in prison who has lost his memory, but the film opens with a shootout. Three men are in an abandoned warehouse and rush to a car with bags containing $20 million and feign dirt on shovels. They are stopped at a designated meeting point nearby by men with guns and the resultant shootout leaves two of the men dead and one critically injured with a head wound. Jump forward 7 years and the survivor, Macdonald (Matthew Modine) has no recollection of his life or the events that led to his injury. All he knows that he has been convicted for the robbery and the killing of his fellow crooks and is in a high security prison. Doctors and the FBI have tried a number of experiments with drugs to see if they can tap into his memory. The FBIs even believe that he has been faking it.

A younger stranger called Lucas (Ryan Guzman) arrives in prison and promises with the help of some drugs they can get back his past and help him escape from prison. He agrees and is helped by a warder and a doctor (Meadow Williams). Once out, they take him to a safe house where they give him some apparently painful drugs. The FBI and the police led by experienced cop, Sykes (Stallone) are after Macdonald. His memory slowly starts coming back.

Surprisingly this crime thriller is not tongue-in-cheek and must go down as one of Stallone’s weaker films in a career peppered with some turkeys. Shot mostly around the Hutchinson Island area of Savannah, Georgia in an old abandoned concrete factory, Stallone doesn’t really have much to do other than look hang-dog and tough. Modine, best know for starring in Full Metal Jacket (1987) does a serviceable and sympathetic role as the amnesiac criminal. The film also has an annoying moody soundtrack and appears to be filmed quite amateurishly.

Released straight to DVD by Signature Entertainment, Backtrace comes between some big budget thick ear franchises including the Rocky spin-off Creed films, more Escape Plan films and even another scheduled Rambo film, set for release later this year. For those who love a Van Damme and Lundgren film, this might suit. For Stallone fans wanting something equally turgid but with a bigger budget might be disappointed.