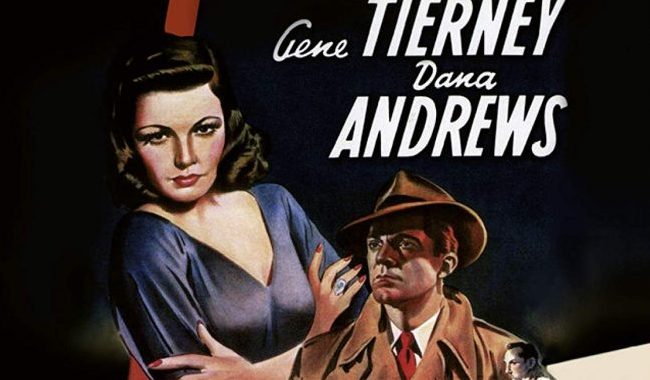 [Spoiler alert] Film noirs are usually associated with hard boiled detective stories, with dolls or dames and plenty of violence and femme-fatales. They were not afraid of a woman getting a slug on the jaw. Released in 1944 Laura was a very different type of film noir. While it nodded to the hard boiled detective it softens its tone and indeed has a couple of camp characters in it.

The character of Laura is omnipresent from the beginning even if she is declared dead in the opening scene. Detective McPherson (Dana Andrews) arrives at the lush apartment of renowned column writer Waldo Lydecker (Clifton Webb). Lydecker is in his Roman looking bath tub and writing the obituary (by way of a narration) of his dead friend and would-be lover Laura Hunt who was found dead in her apartment with her face blown off the day before. McPherson is nosing around Lydecker’s bathroom while Lydecker gets out of the bath. There is, not for the last time in the film, a homoerotic tension here, albeit subtle. McPherson’s character is your typical hardboiled detective, so commonplace in film noir, complete with macho attitude, large trench coat and fedora. Indeed, Lydecker more than once mocks McPherson referring to women as “dames”. In his own words, McPherson “suspects everyone and no one”. He also interviews Laura’s would be fiancee and playboy, (the even camper) Shelby Carpenter (Vincent Price), who seems to be the chief suspect and even her loyal maid (Dorothy Adams).

McPherson goes out to dinner with Lydecker and gets an understanding of the nature of how she and Lydecker met and the nature of their relationship (through a flashback). The detective then spends the next few days, permanently it would seem at Laura’s apartment. One of the most significant and best known aspects of Laura is McPherson’s obsession with her through the painting hanging over the mantlepiece and is omnipresent in the film. At one point Lydecker quips “are you subletting the apartment? You appear to be living here” and “You’d better watch out, McPherson, or you’ll finish up in a psychiatric ward. I doubt they’ve ever had a patient who fell in love with a corpse.” While dosing on the sofa below the painting he wakes to Laura (Gene Tierney) coming into the room. At first he, and we think this is a dream, but no she is real. It is soon discovered that the dead woman in Laura’s clothes was a model who worked for and had been having an affair with her fiancee, Carpenter. Naturally, even Laura herself becomes a suspect, but of course the motive may or may not have changed.

Laura, as with many film noirs have a heavy witty and caustic script, a flashback sequence and some superb chiaroscuro camerawork (complete with rain) by Joseph LaShelle which looks superb on the High Definition 1080p presentation. Master director Otto Preminger came to the project as a prodigal son. He was one of the many directors and cinematographers imported from Europe who joined the Hollywood studios. From Vienna, Austria, Preminger was brought over to 20th Century Fox by Darryl Zanuck. He made a couple of lesser films before a fallout with Zanuck and him high tailing to Broadway and theatre direction. Zanuck brought him back to make revisions to the script based off Vera Caspary’s novel. After the initial filming by director Rouben Mamoulian, Preminger felt that Mamoulian missed the point of the book and was duly dismissed by Zanuck in favour of Preminger. And so started the career of one of the great director’s of the golden age of Hollywood.

This Eureka Entertainment release, #196 in their Masters of Cinema series, Laura looks good and shows the silver screen in all its glory, complete with the chintz of the interiors. The dialogue is sharp, witty and brilliant all the way through with some perfect casting from Andrews as the tough talking wisecracking cop, out wisecracked every time by Webb’s camp Lydecker who seems to emulate Lord Henry in Oscar Wilde’s ‘The Picture of Dorian Gray’. Vincent Price is an interesting choice as the playboy. Never an actor that makes for an obvious romantic lead, once again a camp character and comes across as a weak Mummy’s boy.

There are a couple of brief featurettes on the disc including an interesting interview with the film’s composer, David Raskin; the other is a 2004 brief featurette. Other extras on the disc are various radio versions of Laura and a couple of commentary tracks, including one with film historian Rudy Behlmer, who also provides a commentary to a scene that was cut from the original theatrical release for its displays of opulence during wartime conditions. Both versions are available on the disc.