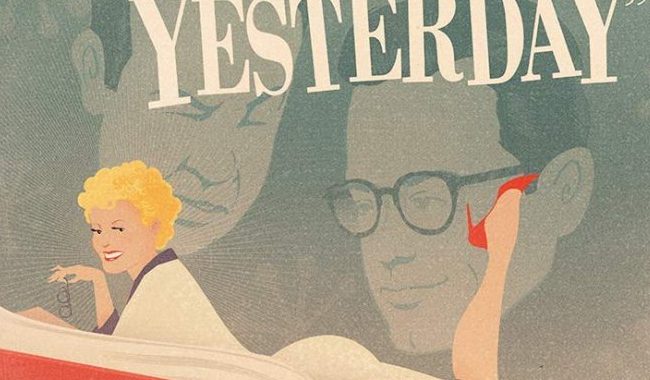 What is evident in the three featurettes on this Arrow Academy release of George Cukor’s Born Yesterday (1950) is how relevant to American politics the film is to modern audiences today with Broderick Crawford’s brash and vulgar scrap metal magnate trying to woo Senators in Washington D.C. A timely release in which the commentators compare him to Trump and the vulgarity that runs through current US politics, whereas William Holden’s young political journalist would perhaps today would be represented as a part of the “metropolitan elite”. But it is Judy Holliday as the steel magnate’s girlfriend who is the real star of the film.

The film opens with the vulgar and uncouth scrap metal tycoon Harry Brock (Crawford) arriving in D.C. with his ‘girlfriend’, Billie (Holliday) and their small retinue, including Brock’s high functioning alcoholic lawyer, Jim Deverey (Howard St. John) at a hotel where they have hired a whole suite. From the get-go Brock is crudely throwing his weight around when he is approached by a political journalist, Paul Verrall (Holden). Brock admires Paul’s smart ass dismissives, but is in Washington to woo and ‘influence’ politicians. Brock is a tad embarrassed about his uneducated and dumb talking gal and decides to hire Paul to educate her into polite society (not that he is any better). What Billie doesn’t realise is that she owns a share in his business with Brock needing her to sign documents.

Paul gives books for Billie to read, takes her round Washington to the Library of Congress, the Jefferson Memorial and the National Gallery and she slowly gets clever and dons glasses. Based off a Broadway play by Garson Kanin, despotic Columbia head Harry Cohn was reluctant to sign-up Holliday  who had made a success of this role on the stage and at one stage seemed to want anyone but. However, director Cukor as well as Spencer Tracy and Katharine Hepburn put pressure on Cohn and had her cast in the film they were all involved in, the courtroom drama comedy Adam’s Rib (1949). Although a relatively small part, she impressed enough to win the part and Cohn’s attention. As this Arrow Academy release makes clear, the focus is on Holliday and how she more than matched the boom of Crawford and perfectly plays the not so much dumb blonde as poorly educated woman who discovers education as a liberator. The fact she becomes so learned in a small space of time is a stretch, especially her ability to memorise Thomas Paine. Holliday won the Academy Award for Best Actress in 1951, an especially high achievement knowing she was up against Bette Davis for All About Eve and Gloria Swanson for Sunset Boulevard.

Once again Cukor proves how to get into the psychology and understanding of women when we look at the classics he made before and after Born Yesterday: all those wonderful Katharine Hepburn vehicles, The Women (1938), A Star is Born (1954) and My Fair Lady (1964, which, like Born Yesterday, is a ‘Pygmalion’ story). Cukor perhaps more than any other filmmaker until Pedro Almodóvar’s films specifically had women at the centre of the story. The film developed beyond the setting of the play, solely in the hotel suite by adding the Washington location scenes. Many have read these scenes as nothing more than a little cheesy, but in the context of the film being more relevant today, this only serves to add greater relevance to today rather than drawing us further away. Only the very final shots of the film serve as a throwaway.

Extras on the disc are just right, including an as usual eloquent visual essay by David Cairns, an  appreciation by film critic Geoff Andrew and an especial appreciation on the life, work and talent of Judy Holliday by Richard Dyer.