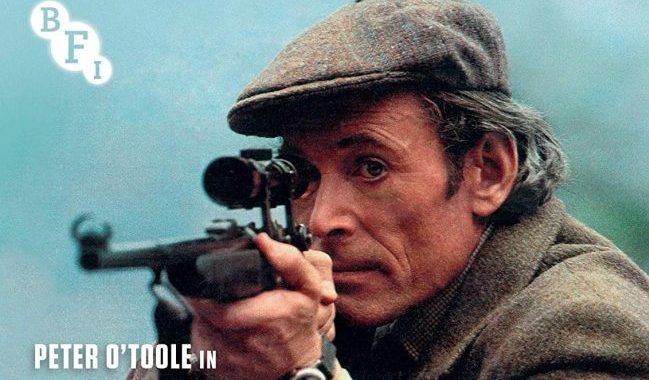 There were a number of attempts on the life of Adolf Hitler through various means of assassination. Of course he survived every one of them, believing he survived through some kind of divine providence. The best known were the the Wolf’s Lair assassination in East Prussia in the Summer of 1944 and the Georg Elser attempted bomb attack in the Burgerbraukeller in November 1939. The film Rogue Male (1976) has an English aristocrat, Sir Robert Hunter (a pun?) (Peter O’Toole) on a Bavarian walking tour in early 1939 and following a game shoot, has Adolf Hitler in his sights with his hunting rifle while Hitler takes afternoon tea on the terrace at the Berghof. For realism these scenes let the film down badly making it look like a poor documentary reconstruction. For one, the Welsh hills where it was shot are a poor substitute for the Bavarian Alps and the Berghof looks nothing like the Berghof (compare for example with an extra on the disc, all the surviving 16mm home filming by Eva Braun on the Berghof terrace).

Hunter is caught red handed by an SS officer who happens to be passing and is taken for interrogation. Hunter, rather unconvincingly tells his torturers that he was merely a tourist on a hunting trip. The sadistic SS torturer, played by Michael Byrne, is more like Herr Flick from the TV comedy ‘Allo Allo’ than a genuinly menacing Nazi ideologue. When he has Hunter flung off a cliff face, his work for a close protection corps officer seems uncharacteristically inept and survives the fall. Hunter, nails torn from his fingers and looking pretty battered makes his way back to the UK with the help of a Bavarian fisherman and a couple of sailors. Once back in Blighty he realises that he is being followed by a couple of Gestapo agents (one of which is played by John Standing) that he tries to avoid as it has been pretty clear from Her Majesty’s government that they were not even going to offer help. Alistair Sim plays a wealthy relation who makes it clear they won’t offer help.

Rogue Male was made as a TV movie for the BBC and was shown over the Christmas 1976 schedule (which I do remember seeing). It had originally been a 1939 wish fulfillment novel by Geoffrey Householder and made into a Hollywood movie by Fritz Lang called Man Hunt (1941) which had been criticised in the past as mere propaganda, which of course it was. The shooting schedule included an impressive 29 locations for a 25 day shoot. Indeed the performances, especially the stiff upper lip performance by O’Toole seems very mannered and over such a relatively short shooting schedule there cannot have been too many takes per seen. There is a cast of familiar faces in the film too including John Standing, Harold Pinter, Maureen Lipman as well as the last performance by Sim as Hunter’s Uncle.

It is a curious release by BFI, but does have plenty of the usual contextual as well as connected random extras on the disc from an audio only interview with scriptwriter Frederic Raphael at an NFT Lecture. Other extras include a brief featurette interview with Raphael who talks about the working relationship with Pinter, an interview with director Clive Donner as well as a couple of archive newsreels, one being of a march by Oswald Moseley and his British Union of Fascists.