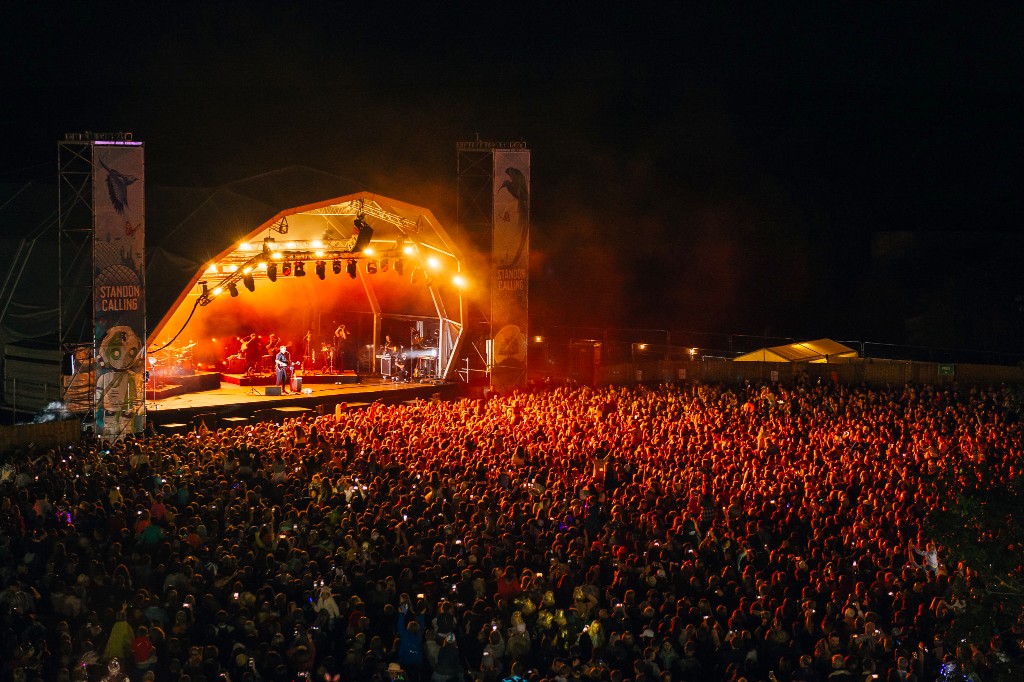 After the record-breaking success of 2018, Standon Calling continues to deliver and flourish as one of the essential and eclectic festival weekends of the summer. With 2019 primed to be another joyous celebration of entertainment for the whole family, there is a mammoth array of incredible talent confirmed for the July weekender. From classic hitmaking royalty to one of the most exciting and acclaimed bands of the past decade, Standon Calling 2019 boasts unmissable headliners for the summer festival season. There are very few individuals who can truly call themselves icons in the music world, but Nile Rodgers is undeniably one of them. One of the most influential artists ever to make music, Nile helped usher in the worldwide phenomenon that is disco – and across five decades he’s continued to help shape and produce some of the greatest songs of all time. From ‘Le Freak’, ‘Good Times’ and ‘Everybody Dance’ with CHIC, to his star-studded work with the likes of David Bowie, Madonna, Duran Duran, Daft Punk and more – there’s nobody on the planet able to bring the party quite like Nile Rodgers & CHIC, and Standon Calling will be basking under the disco ball for an almighty Sunday night headline party come July.

Truly leading the way when it comes to the most celebrated bands of the modern era, Wolf Alice are ready for their defining headline moment. Rising out of Camden with their bold and potent indie sound, they’ve burst through the doors with the sort of instant power and knack for insatiable anthems that’s scooped them plaudits across the globe. After the stunning success of debut album ‘My Love Is Cool’, the follow-up ‘Visions Of A Life’ confirmed Wolf Alice’s place as a special band – playing the biggest shows of their career and rightfully scooping the coveted 2018 Mercury Prize. With a live show that jumps between the raw and ferocious to the delicate and warm, Standon Calling will bear witness to a band who are primed to soundtrack an entire era, in a moment to tell generations to come about.

One of alternative music’s most celebrated bands, Echo & The Bunnymen carry an almost mystical aura around them, with over four decades of crafted post-punk making them clearly stand out as one of British music’s true greats. Led by the iconic figure of Ian McCulloch, expect their set at Standon Calling to be a special journey across their mesmerising catalogue. Arguably the band of 2018, Idles return to Standon Calling in 2019 after first making their mark on the Laundry Meadows stage in 2017. Thriving with punk ferocity yet compassionate and vital in every word and fibre they throw into the mix, they scooped all the plaudits last year for their earnest takes on the NHS, Samaritans and more – named as BBC 6 Music’s Album Of The Year and playing the biggest shows of their career. An unmissable moment indeed, Idles will continue the revolution at Standon Calling 2019.

Scooping numerous 2019 tip list nods, top Scot Lewis Capaldi is primed for a mammoth year ahead – with his immediate and enticing tales ready for the bigger venues he deserves. Following in the footsteps of breakthrough names taking to the stage at Standon Calling in the past, expect this set to be the moment where a new household favourite is crowned. Fully embracing that Standon spirit of carefree fun and technicolor silliness, The Go! Team will bring their kaleidoscopic world of swooning indie hits to this year’s festival, with the likes of ‘Ladyflash’ bound to be triggering smiles and celebration with ease. Also revealed today, GLOW star and indie favourite Kate Nash will head to the Hertfordshire fields, bringing a catalogue of diverse and rapturous hits with her for a trip across a staggering career that continues to go from strength to strength. Alternative trio The Joy Formidable bring their all encompassing live show to Standon Calling, building on a critically acclaimed career that unveils something different and unique at every turn. The Mercury Prize nominated The Big Moon will be hitting Standon Calling with their ready-made festival anthems, building on the infectious hooks of debut album ‘Love In The 4th Dimension’ and pointing to their next exciting chapter, while revered live riffers Band Of Skulls return to Standon with the sort of high-energy and punchy set that makes them bonafide festival royalty whenever they come to town.

Recognised for its incredible attention to detail when it comes to hosting some of the most exciting acts in new music before anyone else, this year’s Standon Calling is no exception. It’s lead by guitar-swooning risers Sea Girls who’ll certainly be grabbing attention this summer – building on their BBC Sound Of 2019 nomination with the sort of huge indie cuts born for festival summers. Whether it’s the psych-weaving Flamingods, the ramshackle grooves of Warmduscher (featuring members of Fat White Family and Childhood amongst others), the mesmerising atmosphere of York’s The Howl & The Hum, This Feeling approved Saint Agnes, future pop mover Laurel, the immediate sounds of Emily Burns or Manchester’s top-tipped Big Society – it’s a year packed with future stars waiting to be discovered, where fans find their next favourite band first.

Fun for all the family, Standon Calling is about more than simply sensational acts taking to the stage – but a true 360 degree party of fun and unmissable moments. It wouldn’t be Standon Calling without The Cuban Brothers. Consistently drawing some of the biggest crowds the festival has ever seen, their tongue-in-cheek show remains one of the most popular requests each and every year. Returning with more side-splitting energy, they’re a must-see at Standon Calling 2019. Ripping through celebratory Springsteen favourites, The She Street Band are sure to go down a storm as the summer sights follow ‘Thunder Road’ all the way to Standon, while the supergroup you never knew you needed Elvana combining the sounds of grunge’s ultimate pioneers, Nirvana – all fronted by Elvis Presley for a tribute extravaganza.

Family kingpins Dick & Dom are leaving the Bungalow to set up home at Standon Calling this summer – bringing their own DJ Battle to the fields for a laugh-out-loud gem perfect for all ages. The iconic Mr Bloom & His Band – of CBeebies fame – will be bringing all the hits from his beloved shows, gathering friends from the allotment for a singalong party, while the Jurassic will come to life with the How To Train Your Dinosaur Live Show roaring into view with a trip back to the very beginning. With a new experience at every turn, Standon Calling is the definitive festival for families and friends alike – a coming together of like-minded people all enjoying a festival firing on all cylinders.

You can also expect pumping beats and tunes throughout the weekend, as thrilling electronica sits pride of place in everything Standon Calling is – bouncing across genres, eras and styles in emphatic fashion. It’s lead by Scottish electro pioneer Erol Alkan, the Phantasy Records head who stands as one of the genre’s most celebrated producers. Remixing some of the biggest artists of the past two decades, his sets are always packed to the rafters – with his turn at Standon Calling an essential sight for the weekend. He’s joined by Simian Mobile Disco the beloved electro house duo who have become a calling card for forward-thinking beats and treats, making their set at Standon Calling this summer one that’s bound to kick-start the party spirit for a memorable moment in the festival’s history. With Soho Radio bringing a catalogue of top-level DJs across the weekend (including Tasty Lopez, 4 To The Floor, Emily Dust and Delia Teșileanu) and the likes of Club De Fromage, Feeling Gloomy, Age Against The Machine, Bowie Disco, The Indie Kid’s Kids Disco and drum’n’bass titans Hospitality returning to Standon for sincilating takeovers, the party is guaranteed to be ringing large across the weekend.

Packing an unrivalled atmosphere and a reputation for delivering unforgettable festival moments, Standon Calling offers a welcoming embrace to a weekend of music, arts, fun and pure festival joy. With an ever-growing and loyal audience from around the country, it’s a calling to an unparalleled and down-to-earth celebration that once a year pulls a community together. Nestled in the stunning Hertfordshire countryside, it’s an easy-to-reach voyage into something truly special. At Standon Calling they dare to be different, with a purposefully eclectic, inclusive and creative programme, carefully curated to reflect the diverse interests of the crowds that gather year after year in its fields.

By day, expect music to touch your heart, make you think, make you mosh and make you dance. Indulge with award-winning food & drink, settle in to enjoy acclaimed comedy, or entertain the whole family with activities and performances for all ages – taking a dip into the swimming pool or witnessing the famous Standon Calling Dog Show. The options are endless. By night, Standon Calling is one bold show-stopping beast, as world-class performers arrive in full force. Don’t miss late-night frivolities from some of the most celebrated electronic acts and DJs on the planet, leading the party right up to 4am. The perfect home for summer memories, Standon Calling is a defining beacon of the British festival experience.

Reflecting on the latest wave of new acts announced for Standon Calling 2019, Founder and Festival Director Alex Trenchard said:
“Every year at Standon Calling we want to bring an experience and show that people will never forget. This year, I feel we’ve done that and more, with one of my favourite bands of the past decade Wolf Alice and one of my favourite bands of all time Nile Rodgers & CHIC topping the bill in 2019. From top to bottom there’s something for everyone, and we’re excited to welcome everyone for an incredible weekend this July.”

Tier 3 tickets are now on sale for Standon Calling 2019 – with previous tiers selling out in record time. For further details, head to http://www.standon-calling.com/tickets