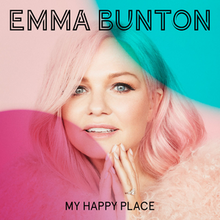 Emma Bunton has announced her highly anticipated brand new album ‘ My Happy Place’, which will be released via BMG on 12th April 2019.

Spice fans can rejoice, as ‘My Happy Place’ is a brand new collection of 10 Emma songs that she has recorded over the last two years, all produced by pop maestros Metrophonic.

The first song from the album ‘Baby Please Don’t Stop’ is released today Wednesday, February 27th. Written by Emma with Paul Barry and Patrick Mascall, the song is a storming sixties influenced smooth pop classic, which is sure to delight Emma fans across the globe.

Emma has duetted with a selection of music’s finest on the album. She collaborates with Robbie Williams on a brand new version of the Spice Girls smash ‘2 Become 1’, with Will Young on ‘I Only Want To Be With You’, Josh Kumra on ‘Come Away With Me’, and her very own Jade Jones on ‘You’re All I Need To Get By’.

The album features two brand new original songs co-written by Emma herself including ‘Baby Please Don’t Stop, plus ‘Too Many Teardrops’, which is another slice of sensual sixties pop.

Emma says: “The reason I called the album ‘My Happy Place’ is because my happy place is with my family, with my friends, listening to music and being in the studio. All those things came together on this album. While recording it my kids came to the studio, my friends came down, my mum listened to every song over and over again. Being in the studio I just feel so happy.

As you get older you feel more confident because actually, your priorities change, and my family have become my focus, but this album is like the icing on the cake. Being able to write, record and perform is definitely that extra sprinkle of magic”.

Emma has sold over 85 million records as a member of the all-conqueringSpice Girls, the most successful female pop group of all time. As a solo artist, she has had seven UK Top 10 hits and two UK Top 10 albums.