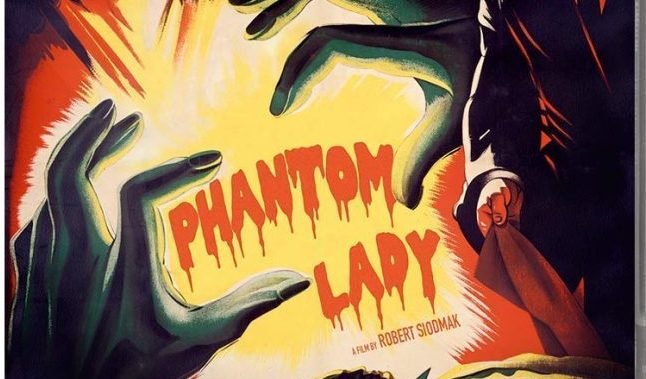 Anyone could be forgiven for thinking that any thriller made in the 1940s is a film noir. It does seem that they all fall into this category. Of course there are the usual tropes to film noir: a flashback or a femme-fatale and the films shot in dark shadows. The latter was in part thanks to the flood of European ex-pats fleeing the persecution and threats of Hitler and the Nazis in Europe. Robert Siodmak was one of them. Siodmak was a German filmmaker who after making a handful of films in Weimar Germany including his first film, Menschen am Sonntag (People on Sunday) (1929) who left Germany for France in 1933 and then on to Hollywood in 1939. After making a number of films including a couple of horror films (including Son of Dracula, 1943). Made for Universal Studios, Phantom Lady (1944) in some senses has the look of a B movie, but in Siodmak’s hands it does have a stylish nourish look that, despite being lesser known is up their with others and lead to some of the great crime and film noir films of the decade.

The plot has mysterious female figures, a psychotic murderer and unusually a female that is the real hero of the film, a change from the usual fast talking or hard boiled macho men more associated with the genre. It opens in a bar with a man, Scott Henderson (Alan Curtis) who is drinking alone and has been stood up. He starts chatting up a melancholic woman (Fay Helm) in a big hat. As he has been stood up after some persuasion he convinces her to escort him to the theatre as he has tickets and has been stood up by his wife. She agrees on the proviso that no names or contact details are exchanged. At the theatre they watch a variety show. A latin Carmen Miranda type singer (Aurora) is giving her the stink eye because she is wearing the same hat. Meanwhile, the drummer in the orchestra (Elisha Cook Jr. in a wonderfully seedy turn) is trying to flirt with her from his drum kit. When they leave they part company. He arrives back to his apartment he finds the police have cordoned off his apartment and his wife has been murdered. The investigation is led by Inspector Burgess (Thomas Gomez) and it is clear that Henderson is the chief suspect. Henderson admits that his wife and he were talking of divorce and he explains that he was with a woman, but doesn’t know anything about her.

As she is not available to corroborate his alibi, the police also visit the barman (Andrew Tombes) who remembers nothing, the cabaret singer who does not claim to remember the hat she was wearing. The drummer too remembers seeing Henderson, but not the woman described. During the trial, all this implicates Henderson and is found guilty of murder and is put on death row. Henderson’s secretary, Carol Richman (Ella Raines) is loyal and in love with Henderson. She believes his story and undertakes an investigation to try and piece everything else and find this mysterious lady. She is joined by Burgess himself, who also believes that it doesn’t add up, that a murderer would come out with a smarter alibi than the one Henderson proffered. After the barman is run over, afraid of something or someone Carol agrees to put herself in the dangerous position of being a honey trap. She flirts as a floozy with the drummer who attempts to rape and then murder her when she finds some incriminating evidence. After she runs away, the drummer is found strangled in the same manner as Henderson’s wife. To go any further into the plot and all its plot twists would give too much away. Based off a novel by Cornell Woolrich, the screenplay was by Bernard C. Shoenfeld with this being his first effort (he would later go on to write another film noir, The Dark Corner, 1946). Between him and Siodmak they have made a very tight thriller with the director bringing much of the shadows and German Expressionism he had learnt in his formative years as a director, not least of all the dark and even bleak psychological aspect of German cinema of the Weimar period. Of course Siodmak would go on to be one of the foremost filmmakers of film noir thrillers, including Suspect (1944), The Spiral Staircase (1945), The Killers, The Dark Mirror (both 1946) and Cry of the City (1948). Phantom Lady was most certainly the film that set Siodmak on the road to becoming one of the foremost thriller filmmakers for the next decade.

Presented by Arrow Academy in High Definition and sporting reversible sleeve options of two original poster artwork, there are not a great many extras on the disc unlike other Arrow releases. The two extras include 50 minute documentary on film noir and a hour-long 1944 radio dramatization of Phantom Lady by the Lux Radio Theatre, that also starred the feature film actors Alan Curtis and Ella Raines.