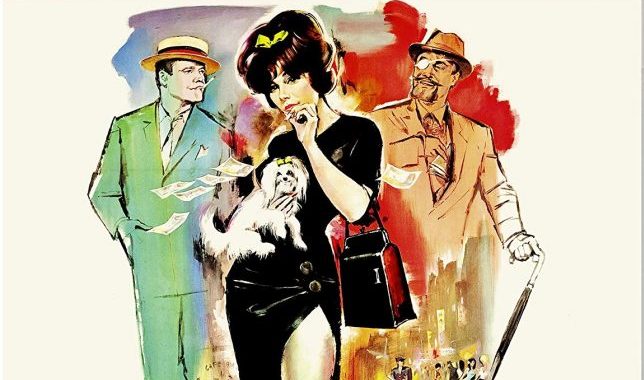 Billy Wilder, like Ernst Lubitsch, brought a European sensibility to Hollywood, yet his films were also distinctly American. Irma la Douce (1963), based off a stage musical by Alexandre Breffort, is set in an almost cliched Paris. Apart from the opening sequence and a church scene at the end, the film is quite obviously a Hollywood set, yet beautifully designed to look just like a Paris street around Les Halles market and in Irma’s small top flat studio apartment (complete with art studio windows).

Uncredited, it opens with a narration by Louis Jourdan who describes the city of love and passion as the camera pans across the streets of Paris as the city se réveille. We later see hookers lining the street (Rue Casanova we are told) and are introduced to one of them, the gaudily dressed in green Irma la Douce (Shirley MacLaine). Irma take clients to her hotel room and each time gives them a different sob story as to why she became a prostitute; feeling sorry for her they give her more money. We never do find out much about Irma’s background. The police are tolerant of the hookers, bribed and turn a blind eye. A new gendarme recently transferred to the Les Halles from playground duties is the naive Nestor Patou (Jack Lemmon). Nestor slowly realises that prostitution is going on around him and orders a police raid. Of course many of the clients include politicians and the Chief of Police leading to Nestor getting the boot from his job. Wandering around aimlessly, Nestor comes across Irma and decides he wants to save her and falls in love with her, in the process beating up her pimp.

Nestor hatches a plan to stop Irma going back on the street by posing as a British aristocrat who pays for Irma’s time, so long as she is exclusively his. He disguises himself as ‘Lord X’ complete with eye-patch. Nestor works early morning at the meat markets of Les Halles to make money to afford Irma. In time Nestor becomes jealous of his own creation of ‘Lord X’.

Irma la Douce is classic Billy Wilder. Jack Lemmon starred in seven Wilder films in total, with this being the third. Lemmon was the perfect foil in his films and is here reunited with his co-star from the previous Lemmon-Wilder film, Shirley MacLaine from the dark black comedy, The Apartment (1960). This is not the first, nor last time that MacLaine would play a prostitute and is here puts in another consistently good performance. But it is Lemmon who drives nearly all the comedy, although there is also a good subtle comedy character actor performance from Lou Jacobi as Monsieur Moustache, the cafe owner across the way from the bordellos.

The Eureka release (in their Masters of Cinema series) has transferred well to the dual format release from a 4K restoration and although there is some grain the colours look superb. The release is framed by some healthy and substantial extras in that there is a highly engaging commentary track by Kat Ellinger who studies the career of Wilder, depictions of prostitution in cinema and French culture, as well as putting the film into the context of when it was made. The film breaks some taboos in the manner in which it portrays prostitution, the clients and acceptance of the profession (that it is set in Paris and not the United States helps). There is also a commentary by film historian Joseph McBride. In addition there is also a talk on the film by Neil Sinyard.

Irma la Douce is an undisputed classic. While not wildly funny (if you excuse the pun), it is a wonderful piece of theatre comedy. It was a wise move by Wilder not to make it a comedy musical but a film, despite its long length, that has longevity.