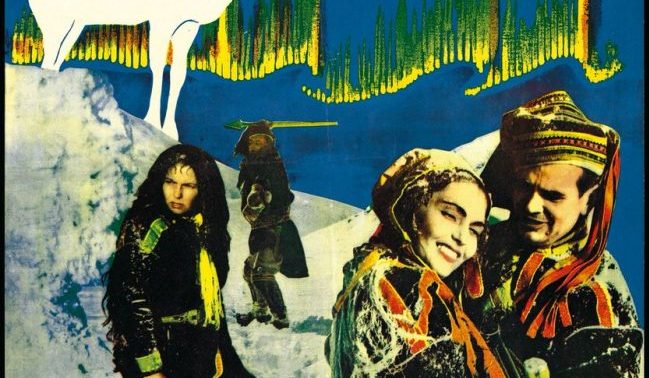 The history of World Cinema has overlooked Finnish cinema. While Swedish and even the small Danish cinema industry has produced some recognised classics whether it is just the films of Carl Dreyer or Elvira Madigan (1966), the recognition has never the less been there. Surprisingly, the Finnish cinema industry had a studio system, while not as expansive as that of Hollywood, was nevertheless there dating back to the earliest days and pioneers of cinema in the 1890s. The biggest studio was Suomi Filmi, the Finnish equivalent of MGM if you like, that dominated the golden age of Finnish cinema. One film that came right at the end of this golden age was The White Reindeer (1952).

The White Reindeer is unusual in many respects. It is also a fantasy horror film that draws on Lapland mythology. The horror genre, some have argued because of the horrors of the Second World War, disappeared from movie theatres, was replaced by science-fiction in this atomic age and did not return until the late 1950s. Vampires were certainly out until later in the decade. The White Reindeer breaks the mould. The story is set around the reindeer herding community of the Laplanders. One herder, Aslak (Kalervo Nissila) marries his young bride, Pirita (Mirjami Kuosmanern) and hold a local wedding party in their honour. The loving Aslak spends a good deal of time away as a herder, leaving Pirita bored and restless. She visits a shaman (Arvo Lehesmaa) who she hopes will act as a mystical marriage guidance councilor. Instead, following a ceremony she performs Pirita becomes possessed by the spirit of a shape shifting vampire that turns into a fabled white reindeer. The white reindeer lures hunters and other men into its trap, leading Pirita to unwittingly attack and suck the blood from the men. This possession also makes her very attractive to opposite sex.

Many critics and commentators have called this film a feminist horror film and in many cases it would be correct, keeping it within the company of such horror films as A Company of Wolves (1984), Ginger Snaps (2000) and Cat People (1942). If the film is thought about in these terms that is correct. There are many similarities between The White Reindeer and Val Lewton’s Cat People, in which a possessed woman turns feline and into a cat hunting her victims when turned on or jealous. However, unlike Cat People, in which everything is suggested, in The White Reindeer we see the image of the spectre-like White Reindeer and we see subtle transformations as Pirita attacks her victims.

Erik Blomberg’s film, however, is a little different though in that it does not set the film in a modern urban environment, but instead in the snowy wastes of the sparse Lapland communities. It becomes folk horror in that Blomberg employs a documentary approach to the film using many non-professional actors and is at pains to shows their ritualistic way of life. In many senses Blomberg’s documentary approach recalls Nanook of the North (1922), Robert J. Flaherty’s enacted documentary classic of Inuit people. Indeed, like Flaherty, Blomberg was a documentary filmmaker in the same tradition and had made many documentaries and shot the films himself. His camera lingers over the snowy wastes of the Laplander valleys and effectively shoots the snow drifts and hunters and herders skiing down the valleys, giving a haunting spectacle to the film. Even though the snow would be glaring white there are soft dusky grey tones to the shots of the snow and ice.

An interesting release by Eureka Entertainment, the package comes as an HD 1080p presentation from a 4K restoration by the National Audio-visual Institute of Finland. There are several brief extras including colour test films of Kuosmanern, a documentary on reindeer herders by Blomberg, an essay on the film by Amy Simmons and an as usual engaging commentary by Kat Ellinger. The film also comes in a nice slipcase of the poster limited to 2000 copies. A classic that deserves wider recognition.