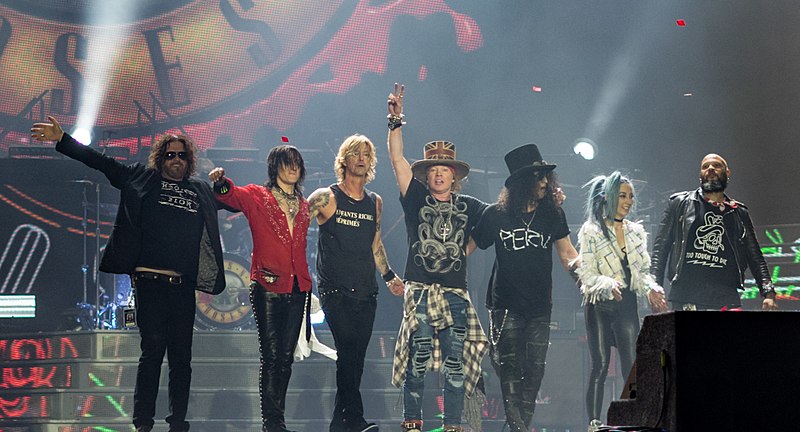 Rock And Cheese: Guns n Roses Are Back In The News

You wait years to hear anything in terms of Guns n Roses news, and then two separate pieces of information arrive at once. One of those news items will be of huge interest to fans of the legendary metal band, and the other will be right up the street of anyone who enjoys budget supermarket Aldi and/or strong cheese.

We suspect that most of our readers are more interested in hearing about the band news than the cheese news, so we’ll get that out of the way first and move on to the good stuff.

Sweet Cheddar Of Mine

In what strikes us as one of the most unlikely and unusual sponsorship and marketing ideas we’ve heard in years, Guns n Roses now have their own limited edition cheese on offer at Aldi. Named ‘Sweet Cheddar of Mine’ (a not-particularly-good play on words), the cheese is limited edition, will cost less than a fiver, and is presented on a ‘when it’s gone, it’s gone’ basis. What that basically means is that if you really want some, you’d be best served to head into Aldi as quickly as possible and buy some. Cheese, like wine, keeps for a long time. It’s therefore possible that the Guns n Roses cheddar may go on to become a collector’s item in future so long as you have somewhere within your home to store it without making the rest of your home stink of old cheese.

The band is no strangers to signing their image rights away for use on official merchandise. The truly dedicated Guns n Roses fan may own an Axl Rose Pop Rocks doll (and a Slash one, if they’re on speaking terms), a beach towel, and an apron. Much cooler than that – and an accolade that not every band gets – is the fact that they have their own online slot game at RoseSlots.com. The official Guns n Roses slot offers everything you’d expect a modern video slot game to provide in terms of bonuses, features and jackpot opportunities, but it’s all set to an interactive jukebox of their greatest hits. Other legendary bands including Metallica also have their own official slot games, but there’s something great about playing a slot to the tune of ‘Welcome to the Jungle’ that you won’t be able to replicate down at your local casino.

Now that we’ve cut the cheese, if you’ll excuse the pun, let’s move onto the really exciting news.

This has been rumoured for a little while now, and was seemingly confirmed when Richard Fortus gave a radio interview in December last year saying that new Guns n Roses music may be released ‘sooner than people think’, but fans then worked out that Slash didn’t seem to have the time for it in his schedule. The busy guitarist has gone straight from the end of the most recent Guns n Roses tour into a new tour with Myles Kennedy and the Conspirators. The fresh tour starts off in Europe, then progresses into South America, before moving on into North America and then Canada. It’s exhaustive, and would seem to preclude Slash from any significant recording activity.

Last week, Slash was happy to clear up the confusion. Guns n Roses really are planning a new album, but it’s not likely to start being recorded until August at the earliest after his current tour is over. Fortus was likely being over-eager when he suggested that fans might hear new Guns n Roses tracks before the end of 2019, although it’s possible an early demo or a single may be available by then if they put things together quickly.

It’s also possible that by saying ‘sooner than you think,’ Fortus was just referring to how long it’s taken for the band to release new material in the past. It may have been ten years since the release of ‘Chinese Democracy,’ but everyone who was around at the time remembers the incredible series of delays that album went through before it finally saw the light of day. When it was released, ‘Chinese Democracy’ was the first album of original material released under the Guns n Roses name since 1991.

Hardcore fans of the band sometimes discount it as a ‘real’ Guns n Roses album, because Axl Rose was the only original member of the band involved in its release. The band’s name was used, but the tracks were really written by Rose working with a series of session musicians that seemingly rotated on a constant basis. In all, seventeen different musicians ended up with a credit on the album’s sleeve, including five different guitarists. The result was undeniably interesting, but somewhat scattered. Now, with Slash and Duff McKagan back in the fold, the original team of writing geniuses behind ‘Use Your Illusion’ and ‘Appetite for Destruction’ seem ready to show the world whether they still possess the magic to create something new, nearly thirty years after they first swaggered onto the world stage and took it by storm.

There is an inherent element of risk to all of this. As much as fans may love the idea of new music from their favourite band, they may not be so enamoured with the reality of it. Guns n Roses classic hits were full of the vigour, arrogance, and attitude of youth, brimming with venom and vitriol. It was apparent even on ‘Chinese Democracy’ that Axl Rose was no longer a young man, and no longer possessed the aggression or pomp of his heyday. Now, we’re another decade down the line. He has Slash back with him help out with the music, but what does a near-sixty-year-old Rose has to say in terms of the message remains to be seen. He may yet surprise us – he’s taken plenty of swipes at the current US Government on Twitter in recent months, and we may find that politics and pith have replaced the sex, drugs and rock and roll in his content.

On the plus side, if it doesn’t work out and the album goes nowhere, they can always sit back and wait for the cheese money to roll in.