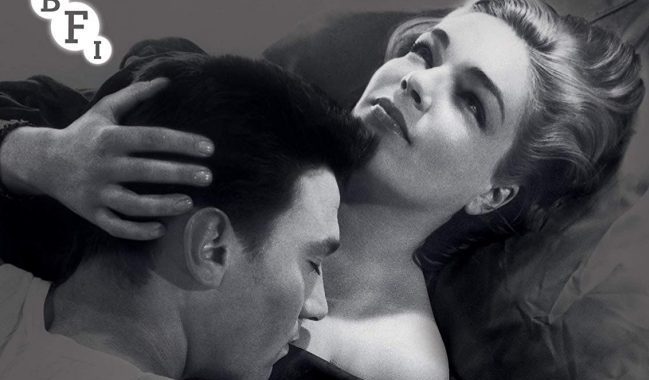 On it’s release, the adaptation of John Braine’s novel, Room at the Top (1959) was controversial enough to earn itself an ‘X’ certificate. Today of course the theme of the film is relatively tame. There is nothing explicit in the film, no simulated sex or nudity, but this very real drama about relationships was nontheless jaw dropping for many at the time, including the censors and the moral guardians of cinema. The publicity posters stated this is “a savage story of lust and ambition”, which, it is fair to say an honest description of the film.

The plot and setting of the film follows along the lines of the British Kitchen Sink dramas following on from the adaptation of John Osbourne’s Look Back in Anger (1958) which launched the Angry Young Man to cinema, theatre and the zeitgeist that would continue with Joe Lampton’s character in Room at the Top and Albert Finney’s lathe turner, Arthur in Saturday Night, Sunday Morning (1960). What these male characters all had in common were that they are working-class (angry) young men looking for their place in the world. Sex and relationships are also the ties that bind all these men.

All these films are set and mostly filmed up North or in the Midlands (although Look Back in Anger was supposedly set in a northern town, it was filmed in Holloway, London). Room at the Top begins with Joe Lampton (Laurence Harvey) pulling in by train to the fictitious northern mill town of Warnley (but actually filmed in Bradford). He has come back to Warnley to secure a job at the town hall and look for digs and it is made clear that a called Brown (Donald Wolfit) runs this town with his factories (in the opening scenes we see a chimney with Brown’s name stenciled on it). Lampton makes it quite clear to friends and colleagues that he is going to make it to the top by any means necessary and begins to flirt and chat up Brown’s daughter, Susan (Heather Sears). Brown uses everything at his disposal to stop Lampton including sending Susan away to the South of France.

Meanwhile, Lampton also starts dating an older unhappily married French woman, Alice Aisgill (Simone Signoret) where he finds a more passionate relationship than the one he has with Susan. As the film develops we see that Joe is boxing himself into corner and to quote an old saying, maybe the only thing worse than not getting what you is getting what you want.

There are two sides to Laurence Harvey’s career – before Room at the Top and after when he mixed being a Hollywood star and working in the occasional film in Britain. Many who knew Harvey noted that the reason he was so good in this film was because he was Joe Lampton. He was himself incredibly ambitious and arrogant, not caring who he upset to get there. Indeed, it was widely reported according to the commentary on the film, that Sears for one did not get on with the actor.

The censor at the BBFC at the time, John Trevelyan recognised that this was one of the real landmark films in British cinema. The talent around it from the support cast to Freddie Francis’s camerawork and the wonderful black and white cinematography capturing the dank Bradford streets and lodging houses to Signoret as the sad Alice in arguably one of the best performances of her career. Her performance is genuine and moving.

It is therefore very welcome that BFI have chosen to release Room at the Top on their label on dual format High and Standard Definitions. It comes, as is usual with BFI releases, some wonderful archive material including footage of Bradford and Halifax from the turn of the century, as well as two commentary tracks; one dating from 2009 with Neil Sinyard and a new one by BFI curator, Dr Josephine Botting in which she goes into the comparisons between the novel and the film in great detail. The one other extra is a short film by Jack Gold, The Visit (1959) following the life of a single woman in a northern town.

It is with more than a little justification that Room at the Top is one of Britain’s key films arriving and causing a sensation just before contraception was legalised in the UK and at the dawn of the sexual revolution.