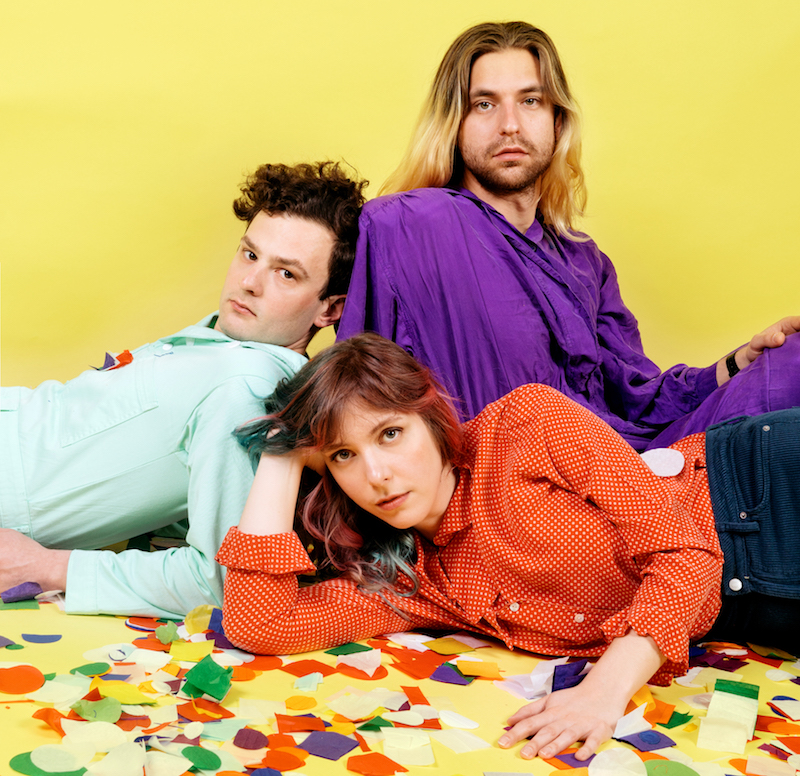 Vocalist Peter Richards says the song is about adolescent disappointment and the emotional solipsism that can follow. Of the video, Richards says the band “reached out to friends in the Seattle arts community and [dancer] Samie Detzer, [choreographer] Alice Ghosti, [director] Jared Caldwell, and the Washington Ensemble Theater answered with resounding support.”

“There are two ways things can fall,”says Dude York’s Claire England. “They can fall and be ruined, or they can fall gently like a feather and be fine.”On ‘Falling’, their second full-length for Hardly Art, the trio explores that sentiment—evoked by the broken cake on the album cover and the soft confetti on the inside sleeve—through impossibly catchy and emotive songs that investigate the ways you can fall in and out of relationships, and sometimes fall back together.

Recorded at Different Fur Studios in San Francisco with producer Patrick Brown, Falling finds Dude York sounding bigger and more fully-realised than ever with hits that would feel perfectly at home sandwiched between Jimmy Eat World and Third Eye Blind in early 2000s alt-rock radio rotation, while somehow still sounding utterly their own. Peter Richards (guitar) and England (bass) share equal songwriting and lead vocal duties on this record, a significant change from their previous album, 2017’sSincerely, on which England fronted only two songs. The duality of their songwriting and vocals compliment each other emotionally and sonically, with Andrew Hall’s harmonies and driving drums providing their own unique character in each song. The collaboration is clear—each part is carefully crafted, with Richards’ guitar adding texture to the verses and then soaring into the particularly special kind of guitar solos that make you want to sing along.

A line of nostalgia runs through the record as the songs investigate the deep ties we have to the pop culture that defined our youth. “I grew up listening to all this pop-punk and alt-rock that was mostly male-fronted, but I want to fill that hole I saw by recreating it now for myself,” says England. “I’m trying to capture the feeling of the music I listened to when I fell in love with music.”

The title track is a gleeful ode to new, unexpected love where all the details matter. “We used to like all the same shit/do you think we’d be friends in 2006?” England sings. The track is pure pop gold, with equal parts sweet sentiment and Josie and the Pussycats-soundtrack playfulness. “I was starting to think/That it would be/When passion lined up with practicality,” England muses on those pesky expectations of love, gleaned from radio songs and rom-coms. “But I secretly hoped when it happened to me there would be no doubt/It would feel like falling.”

Falling is tinged with a sense of longing—whether it’s for the beginnings of a relationship, for the way you thought it was going to be, or simply for the version of a former self you think you remember being. “I feel like a lot of the songs that were reference points consciously or unconsciously for this record dealt with everything very much in black and white, and that really resonates with you when you’re 14,15,16, 17…” explains Hall. “I think people who have nostalgia for those songs are exploring that grey area a little bit more.”

The delightfully melodramatic “Box” sounds like a lost gem from the NYC early aughts post-punk revival, with Richards’ deep, emotive voice singing playful nods to The Killers and Dashboard Confessional while sneaking in lines of a fallout that cut deep—“Now on your own/There’s no one left for you to hide from behind your phone”—before soaring into the Cure-like chorus “I’ll never love again.”

The production on Falling is full of meticulous details and sonic tricks designed to hit that deep teenage place in your heart, whether it’s the dense, chugging guitars or impeccably-placed harmonies. “We all have very different reference points for music and then when we swap them in becomes something totally different,” says Richards. He didn’t grow up as attached to the radio-friendly emo music that defined the adolescence of the rest of the band, but when he got into the genre in the past few years decided he wanted to embrace it in his songwriting, which comes across in the heavy guitars and dramatic arrangements that shine on songs like “How it Goes.”

Ultimately, the relationship Dude York is really investigating and playing around with is their relationship to music. By playing with tropes of romantic relationships, Dude York created a record that feels like a love letter to the alternative radio of yesteryear while managing to stay uniquely singular.