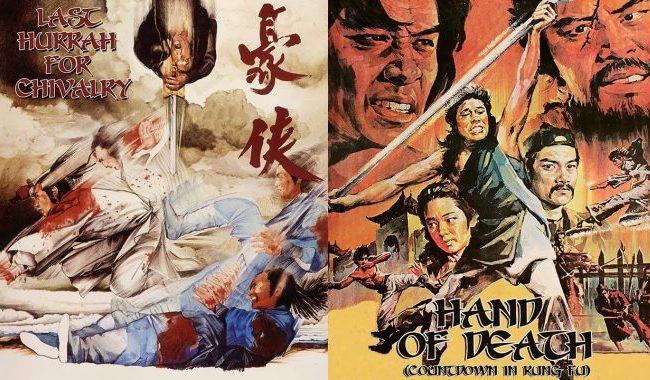 John Woo is best known for his international action films starring John Travolta (Broken Arrow, 1996 and Face/Off, 1997) and Nicolas Cage (Windtalkers, 2002), but of course his reputation goes back further to his Honk Kong action movies such as The Killer (1989) and Hard Boiled (1992), both starring Chow Yun-fat. Going back further still, Woo started his career with the more traditional Hong Kong martial arts films that had come out in great numbers since the late 1960s. Included in this collection of early Jon Woo films released in their Masters of Cinema series by Eureka Entertainment are Last Hurrah for Chivalry (1979) and Hand of Death (1976).

The earlier of the two films, Hand of Death, although a more traditional semi-comic action martial arts is also well known for it’s young co-star in a support role, Jackie Chan. Set during an undetermined period of the Qing Dynasty (between the 17th century and the early 20th century), the film has a powerful warlord who uses his power to defeat and kill the Shaolin monk warriors. Shaolin survivors do batltke with their foes in a cast that includes such martial art luminaries as James Tien, Yuen Biao, Sammo Hung, Doran Tan and of course Chan in some pretty much non-stop action.

The second film is quite different and has a more fantastical feel to it. This is a more fully blooded film and, it has to be said more of a standout and better film. Last Hurrah for Chivalry has a pair of for hire assassins in Ancient China. They battle out between the merchant who hired them, against each other and other assailants who take them. The plot twists and turns and with betrayal, loyalty and allegiance to an effective stand off finale with some fantasy elements to do with blood that give the film an added dimension.

The costumes, as ever with Golden Harvest films are great, but it has to be said for such a master as Woo at handling action, some of the choreography of the fight sequences look exactly that, choreographed. The pony tailed wigs too in both films are simply dreadful. But they are both interesting representations of earlier John Woo films. Of course the 2K transfers look impressive, even if it does show up some of the films sometimes creaky production values. Extras on the discs include interviews and a featurette on Woo and commentaries by martial art films expert, Mike Leeder.