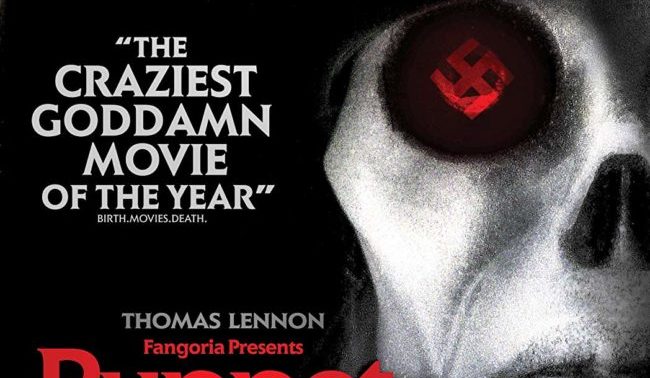 In a scene in the 1993 dystopian science-fiction B movie, Robot Wars, survivors are walking through an abandoned city where a cinema is showing ‘Puppet Master 54’, an in-joke on the franchise of a cult series of horror films. Both the original Puppet Master (1989) and Robot Wars were made by Full Moon Entertainment, purveyors of cheap usually direct to DVD horror and exploitation films. The owner of Full Moon is and was Charles Band with Puppet Master among his most successful films. Band and his previous company, Empire Pictures had previously been involved and released the huge cult horror successes Re-animator (1985) and From Beyond (1986). Another constant in all the aforementioned films is the horror actress Barbara Crampton who also co-stars in the latest in the franchise, Puppet Master: The Littlest Reich (2018). Crampton has had something of a horror revival of late appearing in a string of horror and exploitation films. In the 1980s and 90s she had been a B movie scream queen before becoming a star in cheap second rate soaps. Now approaching the age of 60 and still looking great, Barbara has enjoyed a revival since appearing in the home invasion horror, You’re Next (2011) with one of her best roles in We Are Still Here (2015). Although she had appeared in the original Puppet Master and her character references her role as a policewoman in that film, here she plays a different part.

This latest film in the franchise is really a re-boot, but is the 13th in the series and is by far the best, and that includes the original 1989 film. This new version works because it is self aware and pays homage to the original film with an added self aware wit and humour. The film opens in a small Texas town in which an odd German stranger (Udo Kier) arrives at a bar where he is rude to the bar girl. Scarred and wearing a fedora, he is disgusted that the bar girl is a lesbian. A short while later, while driving home, the bar girl and her lover are garroted and decapitated by a puppet in the back of the car. Years later, in Dallas, Texas, comic book store owner and illustrator, Edgar (Thomas Lennon) has left his wife and moves back with his mom and dad. His late brother was the owner of an odd puppet and when Edgar learns of a convention for the 30 year anniversary of the Bodega Bay Hotel killings at the hands of German emigre, Andre Toulon he invites his new girlfriend to go. He also has an original Toulon mannequin figure that once belonged to his dead brother.

Edgar, his new girlfriend, Jenny (Ashley Summers) and crass best friend, the Jewish Markowitz (Nelson Franklin) decide to go to the convention. They and other fans of the puppets connected to the murders go on a tour of the Toulon mansion, led by a former cop and now security guard for the place (Crampton) who had arrived at the scene of the crime back in ’89. That evening back at the hotel the puppets have come to life and started murdering minority guests: Jews, lesbians and gypsies. The cops arrive, of course making things worse and the puppets, about 45 of them lay siege to the surviving guests: decapitating, disemboweling and cutting throats.

The publicity for the film boasted that this is the most violent film of all time, that there are 21 scenes of puppet violence and graphic cruelty. The High Definition digital imagery on the DVD make all that blood and oomska look all the more visceral. The little fellas go round slashing, stabbing with pickel helms and flying blades, made all the more funny in all its crassness with the Nazi anti-Semite humour with Markowitz realising that those being targeted are because they are the traditional enemies of the Nazis: Jews, lesbians, gypsies and other ethnic minorities. It is actually a funny horror film – a re-boot that works because of its added inflection of humour. It’ll be interesting to see what they do next with the franchise. Extras on the disc include Making Of and Behind the Scenes stuff.