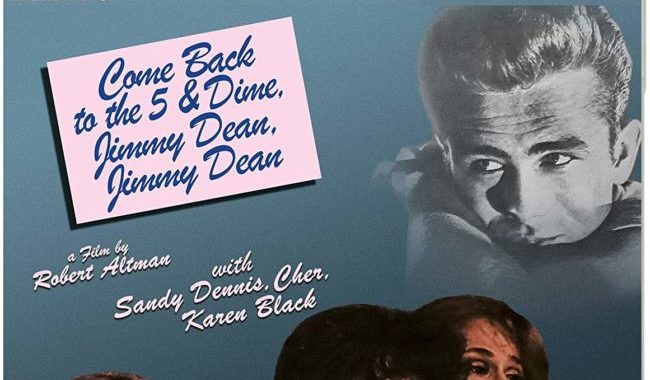 On 30th September 1955 actor and youth sensation James Dean was killed in a car crash near Salinas in California where he was traveling to take part in a racing car meet. Having only starred in three films this set him on the road to becoming an icon. In Ed Graczyk’s adaptation of his own Broadway play, Dean’s presence hangs over the film as though he were a God.

Set to period music in the small and dry hot Texan desert town of McCarthy, the film does not move out of the Woolworth’s 5 & Dime store. A group of local friends, calling themselves the ‘Disciples of James Dean’ have gathered for the 20th anniversary of the death of James Dean. McCarthy is apparently some 60 miles from the town where Giant (1956), Dean’s last film was shot with the friend’s spurious stories and unlikely tales of being present and involved in the filming. Throughout the course of the ‘celebrations’, the friends fall out and discuss their lives with one, the mousey Mona (Sandy Dennis) believing that her son, little Jimmy Dean (whom we never see, but as a character is also omnipresent in the film) was James Dean’s love child. Among the others who gather include the brassy Sissy (Cher), the older Juanita (Sudie Bond) and later with the glamorous and enigmatic arrival of Joanne (Karen Black) who turns out to be a transexual friend of The Disciples. There is also the Texan yahoo, Stella Mae (an early performance by Kathy Bates). The film flashes backwards and forwards between 1955 and 1975 where we get to understand their lives and who they are.

Of course today Altman is best known for his big ensemble pieces, including Nashville (1975), The Player (1992), Short Cuts (1993) and Pret a Porter (1997), but back in the late 1970s Altman had turned his back on Hollywood and was more involved in theatre and small productions that included 3 Women (1977) and Health (1980). He chose Graczyk’s play, originally written in 1976 as a stage production and over the next few years experimented with the small indie productions. He assembled the same cast from the play to appear in the film and made zero effort to move the play away from the confines of the Woolworths 5 & Dime and expand it out. It also helped having such big names as Cher appearing in the film. Indeed the performance by Cher was such a surprise that she did become on the decade’s biggest stars as well as enjoying a rejuvinated pop career. Of course this was not Altman’s first ‘women’s’ film either as he had previously made That Cold Day in the Park (1970), also starring Dennis and 3 Women, as well as A Wedding (1978).

The production design of the film is deliberately cluttered with ephemera with plenty of kitsch James Dean memorabilia. On an extra on the disc, film’s art director David Gropman talks about how there was a deliberate flat 2D look to the film’s mise-en-scène which does give it a nostalgic look. Although the film has been restored and presented in HD, it still looks very grainy to view. The other extras include an interview with editor, Jason Rosenfield who goes into detail about the film, as well as an informative booklet and audio commetary by Lee Gambin.