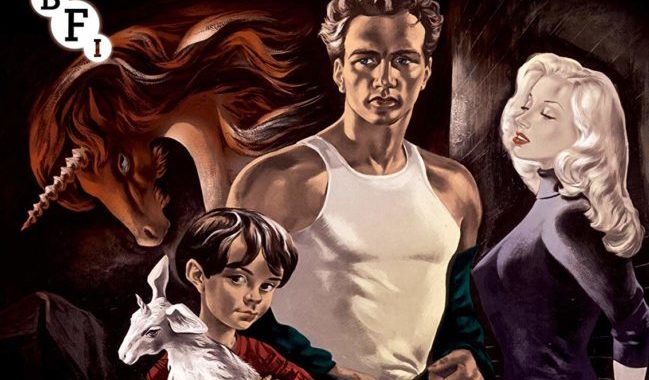 A Kid for Two Farthings (1955), directed by Carol Reed is a love letter to old working-class London, a London of street vendors, market stalls, Jewish tailors, jellied eels and the old traditional Cockney East End. Filmed in Technicolor, this was Reed’s first film in colour, it dispalys a great deal of local flavour to a London long faded with just a few ghosts and familiar sights and sounds that have kept it alive.

In recent years such TV stations as Talking Pictures TV have helped in reviving some long forgotten films such as Police Dog (1955) and The Boys (1963), showing a lost London away from the usual cliched locations and images. What better DVD and Blu-ray label than BFI to release a film that brings to life this old London in a superb package that includes a handful of old newsreels and footage of a long gone piece of London which includes wrestling matches, Jewish life and archive film of market stalls.

A Kid for Two Fathings was filmed around Petticoat Lane market and Whitechapel, but is called Fashion Street in the film, probably referencing the Jewish rag trade in this quarter of London; the film opens with the streets of East End market street life with a boy playing amongst the chickens and pigeons. The boy is Joe (Jonathan Ashmore) who lives in a world of fantasy as the grown-ups around him carry on with their daily lives. Joe listens to the stories and tales of the ageing Russian Jewish emigree, Mr. Kandinsky (David Kossoff), a local shopkeeper and tailor. The problem is Joe, like many children, takes these stories as real. He naively buys a goat from a market trader who convinces the boy that the goat with a small spiralled horn on his head is a real unicorn. When Joe brings the ‘unicorn’ home, needless the family are shocked, while aware of the sensitivities of upsetting Joe.

Of course it is the background flavour and setting of the film that is of great interest. There are many great performances from character actors and well known and familiar faces that play a variety of London types. For example there is Celia Johnson, far removed from the bored middle-class housewife having an affair in Brief Encounter (1945), here playing Joe’s tired seamstress mother with the open door of the shop allowing the sights and sounds of the streets in. Other characters include the older Jewish neighbour, Mrs. Abramowitz (played by the irrepressible Irene Handl), Sid James as the dodgy knock off saleman, Iceberg, the brassy Lady Ruby (Brenda da Banzie) and the fussy tailer (Sydney Tafler) among others. Then there is the sub-plot centred around beautiful platinum blonde Sonia (Diana Dors) and her equally naive, good looking but poorly educated amateur wrestling boyfriend, Sam (Joe Robinson) who gets misguided by a crooked wrestling promoter (Lou Jacobi).

This is one of Carol Reed’s lesser known films, a director with an interesting and diverse career in both Britain and Hollywood that included Odd Man Out (1947), The Third Man (1949), Trapeze (1956) and the musical, Oliver! (1968). But a gem this one certainly is. It is the background flavour rather than any plot that is the films driver and the thing of interest. The accompanying extras highlight this further, further evidence of not only the films authenticity, but frames the background detail. Of particular interest is Jewish emigree Robert Vas’s short documentary, The Vanishing Street (1960) that films the last days of Hallet Street, just off Whitechapel before the bulldozers moved in. A once thriving Jewish community of slums, markets, tailors and butchers shops it fell foul to re-development, tower blocks and new faceless houses that still exist on this street. There is also the post-war (1946) Ministry of Information film about the future projects and plans for London (some of which never came to fruition, others that did).

This is a fantastic package with an interesting contextual essays accompanying the release and would love to see more releases like this from the BFI. London and Britain has produced so many films in its past that help to show rather than merely mythologise the past of both London and the rest of the UK.