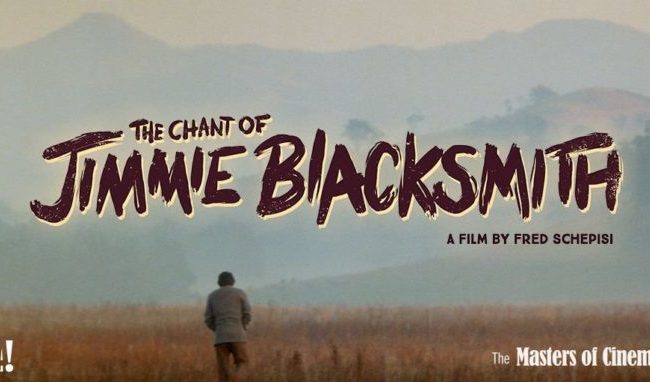 Australian cinema saw something of a renaissance in the 1970s. It largely began with Nicholas Roeg’s Walkabout (1971) starring Jenny Agutter as a white school girl whose plane crashes in the outback. She and her younger brother learn to survive in the outback and are helped by a young Aboriginal man (David Gulpilil). Naturally, a cross-racial sexual tension emerges between the two, confusing them both during their sexual awakening. Sexual awakening also set up the film often regarded as the ground breaker in the renaissance of Australian cinema, Peter Yates’ haunting period piece, Picnic at Hanging Rock (1975). It becomes clear through the films in the new wave of Australian cinema that there is a distance and difference between Australian cinema and that of other Western English language films with Australia striving for its own identity. The Chant of Jimmie Blacksmith (1978) is one of those key films of the decade.

Like the aforementioned Walkabout and many other films of the decade, the film deals with those racial tensions in Australia between the white folk and the indigineous Aboriginals. Where The Chant of Jimmie Blacksmith departs is that the main focus and character is the Aboriginal title character played by newcomer Tommy Lewis. Based off an historical novella by Thomas Keneally, itself based off a true story and directed by Fred Scepisi who would later become a director in Hollywood making such films as Roxanne (1987), The Russia House (1990) and Six Degrees of Separation (1993).

The film is set in the farmlands of Australia at about the time of WWI. Brought up by a white minister and his wife, Jimmie Blacksmith is a mixed race man with the whites only really seeing his black skin. As a boy he is educated and the “savage” in him educated out. He grows up being treated abysmally by his employers as a policeman to temper other local aboriginals before becoming a fencemaker for Farrell (Ray Barrett), a farmer who treats him poorly, despite Jimmie’s work ethic and good manners. Jimmie also tries to engratiate himself with the family. Eventually Jimmie has a one night stand with a girl and gets her pregnant. He decides to marry her. The pair struggle to get by as they bring up her baby, but the treatment of them both alienates Jimmie and pushes him to extreme violence.

What makes The Chant of Jimmie Blacksmith so challenging is that we the audience are right behind Jimmie as he tries to adapt to the white settlers and find acceptance. When he does this with the mother of his child, a series of incidents lead to the murder of, among others mothers and babies. This sets some challenges for the viewers as Jimmie has now gone over the edge and becomes an increasingly unsympathetic character, even though we know he has been pushed to this. Because of this Jimmie Blacksmith is a challenging film, but also a beautifully shot and rewarding film, especially brought out on the 1080p High Definition transfer on the Eureka Entertainment Masters of Cinema release (shown in both the original Australian and internationally released versions). It also has a couple of actors that would appear in many Antipodean films: Bryan Brown and John Jarratt. Brown is probably second only to Sam Neill as one of the most regular actors from this part of the world, while Jarratt would go on to appear as the killer Mick Taylor in the Wolf Creek films.

As would be expected with Eureka’s releases, this is a very complete release with commentaries by critic Alexandra Heller-Nicholas and critic, Fred Schepisi. There are also interesting documentaries on the making of the film and interviews with Schepisi and Tommy Lewis among others.