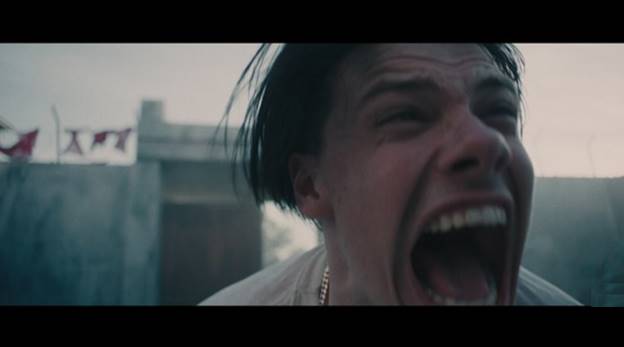 Polydor Records will release YUNGBLUD’s new EP, The Underrated Youth, on October 11. Yesterday, YUNGBLUD shared the official video for the track “hope for the underrated youth”.

A bold, cinematic statement imbued with punk rock fervour, “hope for the underrated youth” was shot in Bulgaria and directed by award-winning filmmaker Andrew Sandler – who helmed the video for Machine Gun Kelly’s “I Think I’m OKAY” ft. YUNGBLUD and Travis Barker. The video follows YUNGBLUD and his ragtag band of outsiders (The Underrated Youth) as they attempt to peacefully resist the oppressive military forces that have pursued them and left the city in ruins.

Of the video, YUNGBLUD said: “I wanted this project to amplify a world that is consumed with unjustified hate. A world, where the common denominator of my generation is the fight for hope, unity and the deep desire for equality. Our ideologies are colliding head on with the hate around us, but we are beating it with a bouquet of fucking flowers! I wrote this project about the people I’ve met around the world, the stories I’ve heard and the journeys, that went on inside my own head.  The video was shot in Bulgaria with the most incredible young people. They helped me tell this story. They made this video what it is. Thank you.”

Praising “hope for the underrated youth, “The New York Times observed, “The solipsism of the moody side of Lil Peep-adjacent SoundCloud rap meets the grandeur of 1990s arena-Britpop.” Dominic Harrison (YUNGBLUD) wrote the song and produced it alongside Zakk Cervini and Chris Greatti.

After causing pandemonium on the streets of London over the summer with pop ups, projections on the Houses of Parliament and fans mobbing the BBC during Annie Mac’s  premiere of “Hope For The Underrated Youth” as the “Hottest Record In The World,” YUNGBLUD is now touring North America and will hit the UK & Europe in October. The Twisted Tales of The Ritalin Club Tour will include a November 21st show at London’s Brixton Academy. See the full itinerary HERE.

Those who pre-order YUNGBLUD’s new EP will instantly receive “hope for the underrated youth” and the previously released “parents,” which PAPER praised as “a defense of the unheard voices in a losing battle against authority.” See tracklisting below. Stereogum called his music “undeniably potent” and noted, “Yungblud dissects the hypocrisy of his elders more sharply than most.” While YUNGBLUD’s music deals explicitly with the issues faced by his generation, it also resounds with hope and a vision of unity.

Born in Yorkshire, multi-instrumentalist YUNGBLUD plays guitar, bass, piano and drums. He released his debut album, 21st Century Liability, on Polydor Records in 2018. He kicked off 2019 with “Loner,” which NME praised as “one of his biggest anthems ever.” YUNGBLUD & Halsey feat. Travis Barker – 11 Minutes followed and has amassed over 216 million streams. Cumulative global streams of his songs now exceed 550 million.