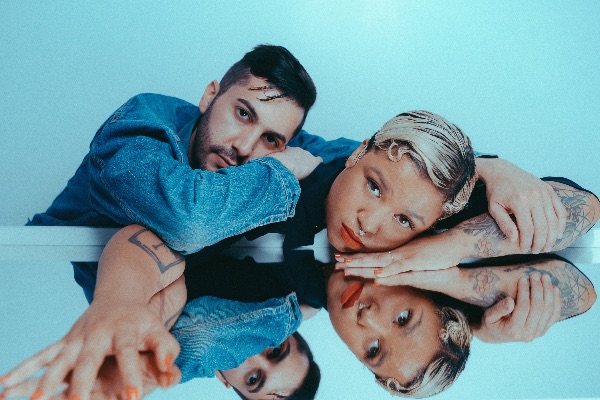 Chicago-based duo DRAMA is the collaboration between producer Na’el Shehade and vocalist Via Rosa, playing to the complementary dynamics of their unlikely pairing by blurring the lines between R&B and dance-pop, heartbreak and bliss. They have announced their signing with Ghostly International and today, they share “Hold On,” their debut single with the label, hinting at an exciting next step for their label debut coming in 2020.

The track showcases the duality of DRAMA, contrasting vulnerability and self-reliance, curatively dancing out from the throes of a breakup with stylish lucidity. “For me, it’s an anthem. It’s what anyone’s friends would say if the love of their life left them,” notes Rosa. “It’s a reminder for myself to keep loving.” Shehade’s production is crisp, catchy, bright, and buoyant, but not lacking emotional substance, accentuating the lyrics as bass and synth lines arpeggiate atop kick drums fit for dancefloor epiphanies.

Rosa grew up in a musical household; her parents played in a reggae band, they toured as a family, homeschooling Rosa into her early teens, limiting her listening primarily to Sade, oldies, Brazilian and Afrobeat music. She kept poetry journals and by high school started writing songs and making beats. After moving to Chicago in 2010, Rosa connected with THEMPeople, a collective at the centre of the city’s sprawling hip-hop scene. Meanwhile, Shehade inherited an entrepreneurial drive from his late father, who immigrated from Palestine to the United States in the 1970s to build a better life. Born in Chicago, Shehade fell in love with DJ culture as a kid and took up music production and engineering; his interest eventually led to professional opportunities, including early studio work with Chance the Rapper, Kanye West, and music projects for MTV and Bravo.

The simple power of DRAMA’s musical expression is matched only by that of their work ethic. Since 2014, the Chicago-based duo have bootstrapped a subtle rise on their own terms, self-releasing the EPs Gallows in 2016 and Lies After Love in 2018, and mapping multiple tours with Midwestern grit. Encouraged by local press and considerable attention on streaming platforms, the duo manifested themselves into a formidable live act, going on to support the likes of Jungle, Poolside, and SG Lewis. They also caught the ear of Ghostly International. With its founding roots in the Midwest, independent philosophy, and wayward approach to electronic-pop and dance music, the label proved to be the logical home for the next era of DRAMA.