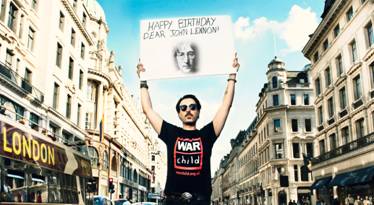 As John Lennon’s birthday draws near so activity hots up for rock band Blurred Vision.

To coincide with October 9th, Lennon’s anniversary, BV lead singer Sepp Osley has put together a single, ‘Dear John’, video and concert to celebrate the great man. All in aid of War Child.

The video features many names from music passing on their good wishes… Geddy Lee (Rush), PP Arnold, Marc Almond, Paul Young, Donovan, Fish, Lawrence Gowan (Styx), Maxi Jazz (Faithless) and many more. All joined by well-wishers from around the world and Sepp himself performing ‘Dear John’.

The song is a melodic tribute to John Lennon, a remix for Blurred Vision by celebrated producer Terry Brown. The track originally featured on the band’s debut album, ‘Organised Insanity’, but the new treatment brings it bang up to date. It is released October 9th.

On the same night, at the Hard Rock Hotel at London’s Marble Arch, a John Lennon concert takes place. Admission is free but donations to the War Child charity are warmly welcomed.

Organised by Osley, it is no surprise that his band will be playing Lennon and Beatles songs at the show. There are, however, some very special guest artists also performing.

Steve Hogarth, the charismatic frontman and voice of multi-million selling band Marillion, along with 80’s global hit maker Nick Van Eede of Cutting Crew “(I Just) Died In Your Arms”), head up the bill.

In addition, rising female pop vocalist Ilona, acclaimed soul/rock songstress Lynne Jackaman, and renowned composer/keyboardist Lyndon Connah (Level 42 etc) will all contribute to what promises to be a fun,  emotional and engaging evening.

Both the song and the show will benefit War Child UK and donations are encouraged now and on the night to raise funds for the charity.

Full details on the video, donating, and securing your free tickets to attend the concert can be found on Blurred Vision’s official website: blurredvisionmusic.com.