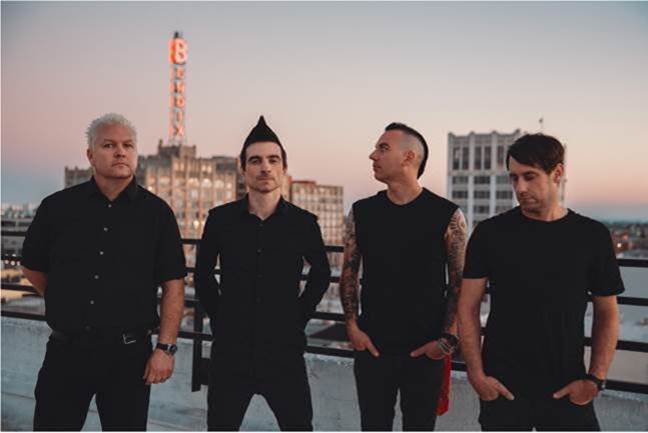 Political punk icons, Anti-Flag, have just released a brand new single “Christian Nationalist” and its accompanying lyric video. For over two decades the Pittsburgh, PA based band have been leading the charge of progressivism in punk, and their newest track proves they still have plenty of fire left. The new single follows their 2017 full-length, American Fall, and 2019 live album, Live Vol. 2, and Anti-Flag are currently putting the final touches on a new studio album, further details to come. “Christian Nationalist” starts with a brief moment of subdued organ before exploding into the kind of powerful guitars and anthemic hooks that the band excel at, and in true Anti-Flag form the song is uncompromising in its message—its lyrics striking directly at the “white neo-fascist supremacists” in positions of power who use oppression to maintain control over others.

The lyric video for “Christian Nationalist” utilizes the images of both politicians who have taken money from the NRA and that of perpetrators of recent mass shootings, learn more here. Anti-Flag vocalist/guitarist, Justin Sane, provided further insight into the song’s lyrics saying, “History is full of wealthy and powerful people using religion and cultism to justify policies of oppression and inequality. Invariably, these policies target the most vulnerable in society so that elites can maintain their dominance. Today we see this same strategy employed by right-wing politicians all over the world. Just as the anti-fascists of the 1930s and 1940s rejected the fascist ideologies of their era, we reject the neo-fascists of this era. Theocracy is dangerous and inherently anti-democratic because it restricts individual choice and provides an avenue by which politicians can claim a moral superiority over “the other”. It gives political cover and justification for policies and actions which might otherwise be deemed morally objectionable, inhuman, or adverse to the best interest of the country.”

Anti-Flag have announced a lengthy run of European tour dates as well as a series of intimate U.S. shows including Mercury Lounge in New York City on October 31st, House Of Machines in Los Angeles on November 8th, and Reggies in Chicago on December 20th. More tour announcements to come, see full itinerary below.