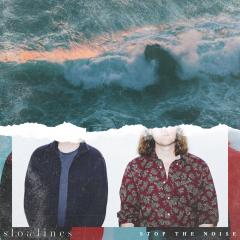 Slowlines are a two piece band from northwest London and have evolved from a series of challenges over the last year. From nearly getting sued and having to change their name to half the band leaving, the music comes from a place of wanting to make exactly the sort of music they want to make and quite literally not letting anything stop them.

Their new single Stop The Noise sees Dan & Tim push the bands sound with the addition of brass arrangements and a more grown up approach. The song is about the noise of the world around you becoming too much to bear.

The B-Side is a remix from White Lies bassist Charles Cave which came about from wanting musicians the band admire to completely reimagine what the song is, and Charles certainly did that! There will also be a video released for Stop The Noise this Friday which was shot during the recording of the song.

The band’s last single Count The Days gained some attention after earning a spot on Spotify’s New Music Friday playlist, which for a totally DIY act is almost unheard of. They are currently in the studio recording more new music and are set to release three more singles between now and January and are gearing up to play their first London headline show in the new year in support of the mental health charity CALM.