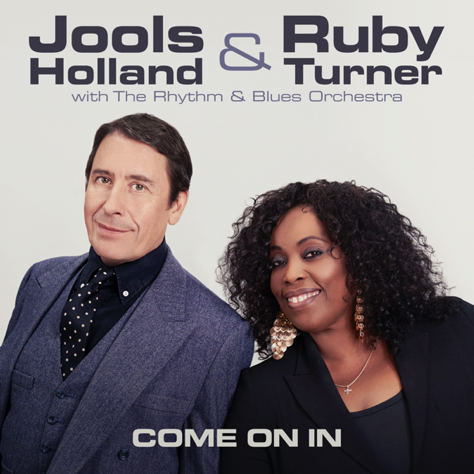 JOOLS HOLLAND AND RUBY TURNER TO RELEASE ‘COME ON IN’

Music legend Jools Holland today announces the release of brand-new single Come On In through Warner Music. Following on from the recent news that Jools will be heading off on a European club tour with KT Tunstall in early 2020, the single sees him collaborate with the supremely talented Ruby Turner who co-wrote and sings on the track, which also features full accompaniment from the renowned Rhythm & Blues Orchestra.

Recorded at Jools Holland’s studio, the single has been long in the making. Ruby and Jools’ friendship and working relationship go back to the early 90s and they have been writing and performing together ever since.  Having just completed a summer tour with the Rhythm & Blues Orchestra they are about to embark on the much loved and acclaimed Winter tour which is now incredibly in its 23rd year.

Jools is also soon back on air on BBC TWO with Later…with Jools Holland and his BBC Radio 2 show.

The single will be available for download on all major platforms from 11th October.

Jools commented “Ruby’s the greatest joy to work with. Whether we are on stage, in the studio, writing at home or running things backstage, we’re always in the same place – which is completely connected musically. Lyrically this song captures the beauty, kindness and humanity of Ruby Turner”

Ruby Turner added “When I wrote this song I was inspired by the wonderful BB King and Al Green, their commitment to music and love of gospel, blues and soul.  It gave me such peace and a strong sense of fellowship and gathering together.  I proposed it to Jools but his schedule is always so manic that it took him nearly two years to get to it.  I sang it down the phone to him and he wrote the music, changed the chorus, switched the bridge and structured it.  We then tried it out live, with no rehearsal, at one of his biggest shows we played that year…”