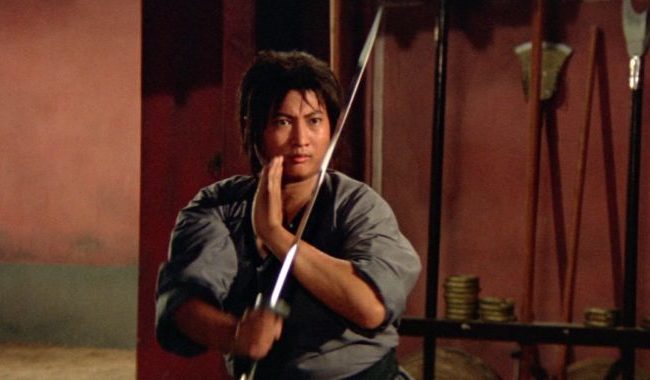 Sammo Hung, also known as Sammo Kam-Bo Hung and Hung Kam-Bo is a prolific actor and filmmaker who since the 1970s made many martial arts films in his native Hong Kong. Released for the first time in the UK by Eureka Entertainment in new 2K restorations, these three films are in a set fully uncut with the original aspect ratio.

According to IMDb, Sammo Hung has acted in some 190 films, directed 37 and a stunt co-ordinator and stuntman on about 64 films. Pretty impressive by any measure. The earliest of the three films in this set, The Iron Fisted Monk dates from 1977 and was Sammo’s directorial debut, having been acting in films for about 10 years. Both this and the second film, The Magnificent Butcher (1979) have a comic action style not too dissimilar to the classic film that made Jackie Chan a star, Drunken Master (1978). The similarities between Chan’s film and these by Sammo Hung are many, not least of all the knockabout comedy.

In The Iron Fisted Monk, Sammo plays Hawker who had been beaten up by Manchus and calls on the help of the Iron Fisted Monk (Chan Sing) at the Shaolin Temple. Hawker is trained by the monk and goes after one of the Manchu officials who has a penchant for raping killing women. Hawker himself is framed by the Manchus for the rape and murder of one girl.

The next film, The Magnificent Butcher takes the action up a notch with Sammo here playing a butcher. When his brother and his wife come to town, she is abducted by the son of a local Master. Butcher Wing soon finds himself against a gang called the Five Dragons and is again framed for murder. What is evident with both these films is how much violence there is towards women and a more than usual amount of nudity and rape. Between the earlier of the two films and The Magnificent Butcher the choreographed violence and action is much improved and better choreographed with some great artistic action scenes.

Arguably the best film in the set is Eastern Condors (1987). This is different to the regualr martial arts films, instead harking towards the likes of Hollywood action films of the 1980s. It has a higher body count than a Chuck Norris or Rambo film (even Sly’s last Rambo film) as a band of rogues go in country to fight. A prologue explains that the film is set a couple of years after the end of the Vietnam War and some missiles have been hidden by the Viet Cong Army. A top secret mission by the US military is to gather a bunch of renegade Chinese and Vietnamese American soldier convicts to go onto a deadly mission to get to the missiles hidden in an underground bunker and destroy them. The prize is that if they succeed in their mission they will earn American citizenship, should they survive that is. Early on the body count of the survivors mounts up. It’s all very The Dirty Dozen (1967) or The Delta Force (1986). It’s actually not a bad film and the action should keep the viewer entertained.

An interesting set and makes a change that it’s not a set of Jackie Chan films from Golden Harvest, the Hong Kong company that rivalled and overtook the Shaw Brothers as the leading exponents of martial arts films in Hong Kong. They look good on the Eureka Entertainment release in their Classics range over three discs and maintaining their original aspect ratio. Each film has been lovingly retored, especially the Cantonese language with new commentaries for each film. There are also interviews with cast members, stunt men and of course with Sammo himself on each of the films.