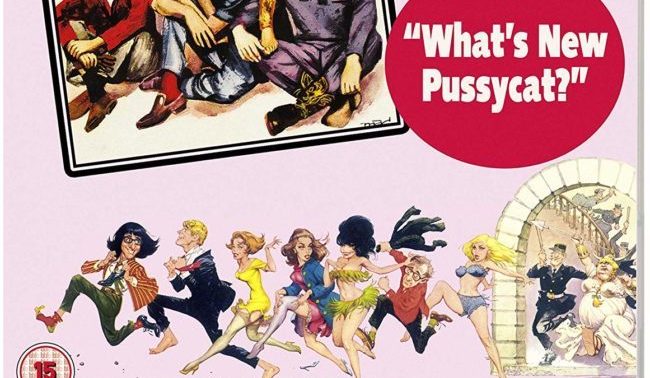 In the 1960s the studio system may have been collapsing, but the star system wasn’t with big names taking up the massive budgets. At the heart of the sex comedy, What’s New Pussycat? (1965) which surprisingly received an ‘X’ certificate for over 18s only, is a farce of the traditional British and French comedy variety with a host of characters running out of each other’s bedrooms.

Released by Eureka Entertainment in their Classics series, this film has sadly not dated too well, despite all the talent on hand. Originally a pet project by Warren Beatty and written by Woody Allen in his first feature as both writer and co-star, it feels more like a series of hit and miss gags than anything more cohesive. Although at the time a successful stand-up comic, it is also very different from any of Allen’s other films, although there are elements that are still retained from the intellectual comic writer’s later work: a psychoanalyst and sexual neuroses at the centre of the story, although slapstick remained a feature of Allen’s early work as a filmmaker. Given this, it’s clear that Allen was given little free reign here and only elements of the Jewish intellectual humour survives, despite the assertions by Simon Ward in the accompanying booklet. Yet, in What’s New Pussycat? Peter Sellers who plays the crushed velvet wearing and long haired (dressed in a kind of bohemian Richard III wig) neurotic psychoanalyst, Dr. Fritz Fassbender, Sellers clearly brings a good deal of himself to the role.

The story has an editor of a fashion magazine, Michael James (Peter O’Toole) who is visitiing analyst Fassbender and relating his amours with beautiful women since he was a school child and who has found himself irrestistible. He is about to propose to his loyal girlfriend, Carole (Romy Schneider), but he is a commitment phobe and cannot help chatting up and seducing other women. He will always call them “pussycat”, so as not to get any mix up with names. Along the way he meets an exotic American dancer (Paula Prentiss), a woman (Capucine) who is being pursued by the married Fassbender and an exotic parachutist (Ursula Andress). Meanwhile Carole tries to make Michael jealous by flirting with his friend, the neurotic painter Victor Shakopopolis (Allen).

Virtually the entire film leads to a farcical runaround, in and out of bedroom doors, over beds and even the odd car incident. In that sense the slapstick comedy is mostly full of misses and somewhat flat with a few bright moments, mostly by Sellers. Filmed in and around Paris, the film was no cheapie. Indeed, as was the case with the 1960s, especially by the big studios (in this case United Artists and Famous Players) this big expense would eventually lead to a collapse of the studios. Having said this, it was much loved by the public, taking almost $19 million in box-office receipts, despite being largely panned by the critics.

It also benefits from some great and memorable music, not least of all Tom Jones’s title tune written by the great Burt Bacharach and Hal David (there are also a couple of other songs by Manfred Mann and Dionne Warwick) with credit titles designed by Richard Williams. Williams and the producers would go on to make a similar film, the James Bond spoof Casino Royale a couple of years later with many of the same cast and production team and same overall look. There are only a minimal number of extras on the disc including a trailer and a commentary track by critics Emma Westwood and Sally Christie. Although transferred in High Definition from a restored print, there is still quite a bit of grain in the film.