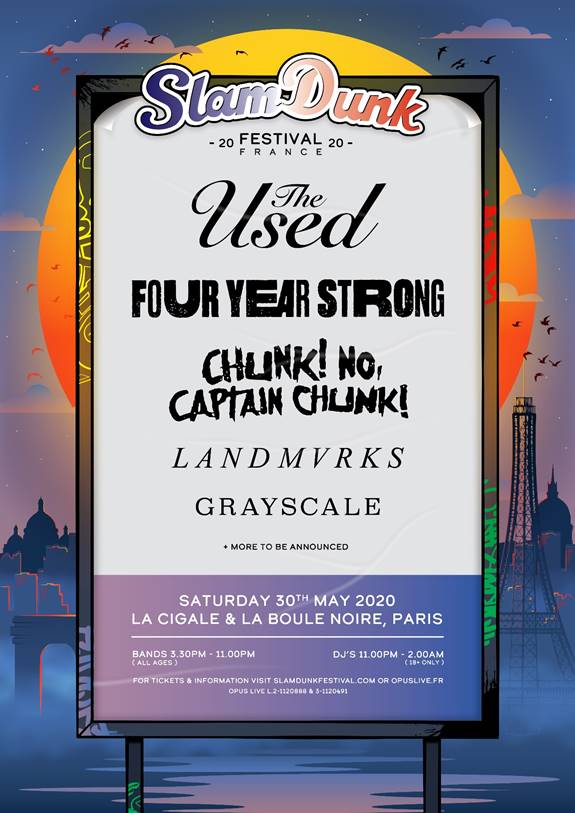 Having firmly established itself as the UK’s best independent alternative festival for pop-punk and rock revellers, Slam Dunk Festival has announced it will be coming to Europe for the very first time, taking over two venues in Paris, France on Saturday 30th May 2020.

Returning to an inner-city format, Slam Dunk Festival France will take place at La Boule Noir and La Cigale following the highly anticipated alternative celebration in the UK at Leeds Temple Newsam and Hatfield Park on Saturday 23rd and Sunday 24th May. The two adjacent venues are set to welcome 10 outstanding artists; five of which have been announced today.

Making their Slam Dunk Festival debut in May, emo titans The Used will cross the channel with beatdown legends Four Year Strong and alt-rockers Grayscale to join French post-hardcore troupe Chunk! No Captain Chunk! and melodic metallers Landmvrks on their home turf. Slam Dunk Festival France will complete the inaugural line-up at a later date.

On Slam Dunk’s European debut, Festival Director Ben Ray says;
‘We’re super happy to announce that Slam Dunk Festival is going across the channel into for the first time.  We hope this is the start of us building a Slam Dunk home in France and we want to grow this into something amazing over the next few years.’

Tickets to Slam Dunk Festival France go on sale on Thursday 24th January and will be available from www.slamdunkfestival.com

Tickets to the Slam Dunk Festival Opening Party are £12 + booking fee. The event will take place at Leeds O2 Academy on Friday 22nd May from 10pm until 2am.

For more information or to purchase both opening party and festival tickets, please visit www.slamdunkfestival.com.