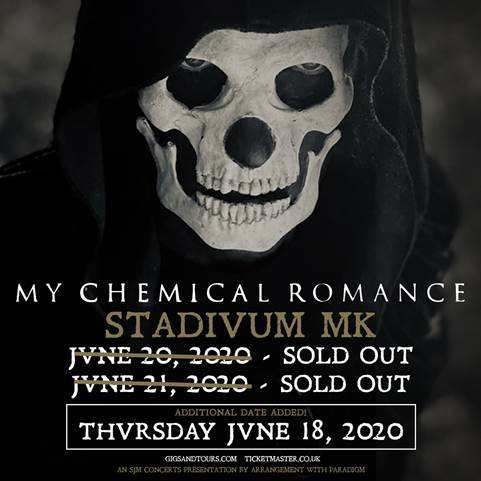 Having sold-out two shows at Stadium MK in Milton Keynes within an hour, My Chemical Romance have now added a third show on June 18th. The three-night run represents the band’s first UK shows since they headlined the Leeds Festival in 2011.

The band commented, “My Chemical Romance are thrilled to add a 3rd and final show at Stadium MK after their 1st and 2nd nights sold out immediately. We’d love to give fans who missed out last week the opportunity to see this show. Tickets will go on sale 9.30 am Thursday 30th January. Please avoid buying from the secondary market for any of these shows as those tickets could be fake.”

Accessible / wheelchair tickets will only be available from Stadium MK by calling the Box Office Disabled Access line on 01908 828740 or in person.

Coach packages will be available at https://www.biggreencoach.co.uk/.

My Chemical Romance reunited just before Christmas to play the Shrine Auditorium in Los Angeles, a show which sold-out immediately. The setlist focused on material from their albums ‘The Black Parade’, ‘Three Cheers For Sweet Revenge’ and ‘Danger Days: The True Lives of the Fabulous Killjoys’, including iconic tracks such as ‘Welcome to the Black Parade’, ‘I’m Not Okay (I Promise)’ and ‘Helena’.