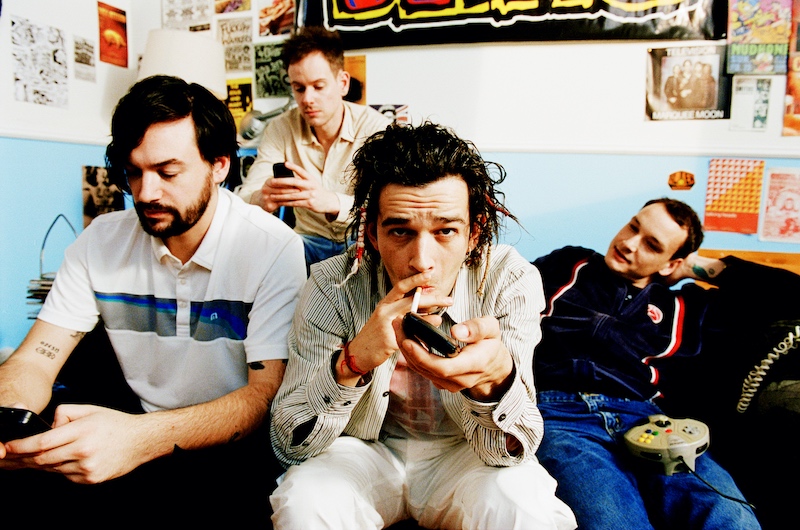 Following their outstanding headline show at last year’s Reading & Leeds Festivals, international icons The 1975 now return for what’s set to be a monumental one day show in London’s Finsbury Park this Summer, with a supporting line up that includes Charli XCX, Clairo, Pale Waves, Phoebe Bridgers, Beabadoobee, Cavetown and Deb Never. Tickets priced from £52.50 +BF go on sale Friday 31st January at 9am and are available here.

The Manchester four piece have had a phenomenal rise to fame, selling out shows globally and releasing a string of critically acclaimed albums. Their most recent single release, ‘Me & You Together Song’ was debuted on Annie Mac’s BBC Radio 1 show, where the band played it as her Hottest Record. Their fourth full-length album ‘Notes on a Conditional Form’, slated for release this year, features the band’s ferocious single ‘People’, alongside the now customary intro track ‘The 1975’ which features a rallying call to arms from Climate Change activist Greta Thunberg.

Following a run of sold out UK arena shows in February, The 1975’s headline show in Finsbury Park will be their biggest show to date and another chance for their legion of loyal fans to see the band’s now iconic live show. With a huge arsenal of hits in their repertoire including ‘Give Yourself A Try’, ‘It’s Not Living (If It’s Not With You)’ and old favourites ‘Somebody Else’ and ‘Chocolate’, this is set to be another milestone performance, cementing their status as one of the biggest and most exciting bands in the world.

Pop visionary and musical chameleon Charli XCX is set to hit the stage with an exuberant display of danceable future-pop, while critically acclaimed artist Phoebe Bridgers will be bringing her raw and revealing songs to a crowd anticipating new songs from her sophomore LP, the follow up to ‘Stranger In The Alps‘. Elsewhere, dreamy US singer-songwriter Clairo joins the line upfollowing the release of full-length debut ‘Immunity’ in 2019. Also set to appear at the one-day event are Dirty Hit labelmates and indie pop four-piece Pale Waves who will play tracks from their top 10 debut album ‘My Mind Makes Noises‘, as well as BBC Sound of 2020 and Brit rising star nominated Beabadoobee, fresh from supporting The 1975 on tour. Other acts set to play are alt-emo star Deb Never and Cambridge-born, London-based singer-songwriter Cavetown, whose self-recorded and produced music captures the hearts of fans around the world. Cavetown’s dynamic performances command rooms and crowds of all sizes through effortlessly fun and catchy melodies like ‘Lemon Boy’ and ‘Boys Will Be Bugs’ as well as enchanting tracks such as ‘Feb 14‘ and ‘Telescope‘.

In a revolutionary turn, this event will be the most sustainably responsible live show ever hosted in Finsbury Park.

In an aim to reduce the onsite carbon footprint by 90% Festival Republic will introduce the use of European sustainably sourced and traceable Hydrotreated Vegetable Oil (HVO) fuel that will power the entire event. The event will also deploy hybrid powered generators with solar arrays and reduce generator sizes from the results of extensive monitoring carried out at the 2019 Festival Republic Finsbury Park events.

Working with urban tree planting specialists Trees for Cities, Festival Republic have confirmed that 1975 trees will be planted in the surrounding local boroughs of Haringey, Islington and Hackney.  A range of tree species will be planted with local residents enhancing community wellbeing, increasing biodiversity, capturing carbon and improving air quality in these areas.

The 1975 have also pledged with ‘One Tree Planted’ to plant a tree for every ticket sold. These trees will be planted globally in Indonesia, Peru, Brazil, the Philippines and India. Tree planting in these areas restores forests that provide much needed temperature regulation on the equator, conserving biodiversity, creating jobs and income for local communities and establishing sustainable land management practices.

To reduce waste and highlight the environmental impact of clothing The 1975 will be repurposing merchandise from previous tours, with live screen printing of a choice of The 1975 graphics.  Fans are encouraged to bring old The 1975 t shirts or those of any other band to be reprinted.

The special one-day event will take place on Saturday 11th July in London’s Finsbury Park and is guaranteed to be the stand out show of the summer.

TICKET INFORMATION
Tickets for the event will go on sale at 9am Friday 31st January and are priced from £52.50+BF for general admission. VIP tickets are available.