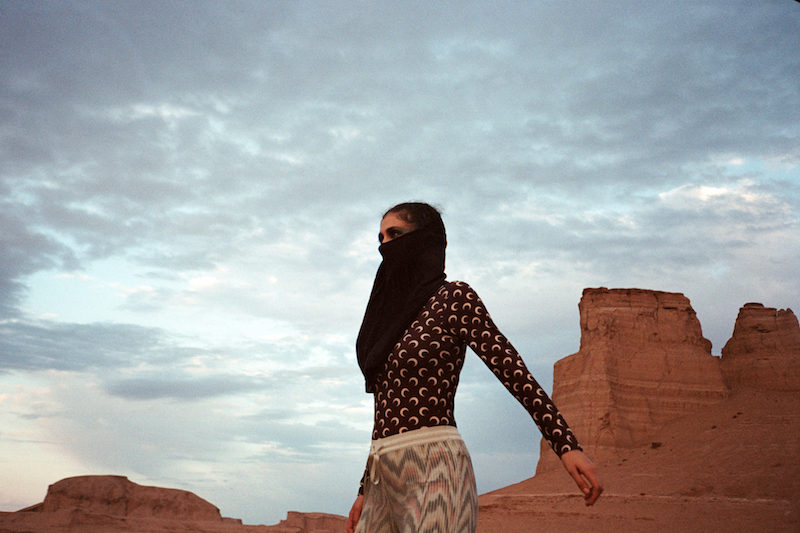 Today we’re excited to introduce to you Sufi-inspired singer and composer Mentrix who will release her debut album My Enemy, My Love, a powerful exploration of resilient womanhood and belonging between eastern and western culture, on April 3rd via House of Strength. The first single & video from the record “Walk” are online now.

The video for “Walk” contains motifs symbolising womanhood, unity, solidarity and spirituality, from the contrast of the concrete and neon of urban Tehran to the breathtaking dunes of Iranian deserts.

Sufi-inspired singer and composer Mentrix draws her sacred music practice into a secular exploration of the illusive dualities of Existence and belonging for her bold debut album My Enemy, My Love, for which she also inaugurates her female-led record label, House Of Strength. Iranian-born Berlin-based Mentrix- real name Samar Rad – fuses eastern and western sounds with lyrical songwriting, crisp drum machines and propulsive traditional Sufi instruments, into a bold and luminous goth-pop debut. Her dazzling polyglot sound has arrived fully-formed, sounding like an Iranian take on The Knife or Zola Jesus.

Mentrix moved to France aged 8 to escape war in her home country. At age 14 she moved back, and had to relearn her Farsi mother tongue almost from scratch, going from studying Latin and French literature to Arabic and the Qu’ran. She then spent time in the UK and now lives in Berlin. Summing up My Enemy, My Love, Samar says: “This album reflects my relationship with the contrasting worlds I lived in, with myself, and all my existential wanderings.”

Samar’s songwriting is inspired by Persian traditional poetry, the teachings of Sufism, intertwine with contemporary synthesizers and drum machines into heady trance-like pop songs. Her lyrical existentialism searches for meaning, a future-leaning ode to her origins. ‘Longing’ is inspired by traditional Mooyeh mourning chant from Lorestan in Iran. ‘Dreams’ builds euphoric trance-like rhythms over a swirling dense backdrop; ‘Loyalty’ chants for patience to a marching drum; the title track spirals into tightening circles of accelerating ecstatic percussions; twinkling synths ride rousing electronic chords in the reflective ‘Igneous Sun’, all textured with distinctive Iranian instruments such as the tombak, kamancheh, ney and daf (usually played by Samar herself), combined with European pop structures.

The title of the album is both a reference to being seen as both an immigrant and a deserter, and to the daf, an iconic percussive instrument originally played in Sufi temples. The daf is the punctuation around Samar’s songwriting – a large hand drum with metal ringlets, its propulsive and trance-like sound has an earth-shaking kick with the sharp clamour of metal. “In Sufism the daf is a calling for the soul to awaken,” explains Samar. “It makes that big sound because it’s empty, and its emptiness means two things: on the lower level someone who is empty and has nothing to offer makes a lot of noise. On a higher level, when you are truly empty of the world the entire universe can resonate within you. It’s the dark side and the bright side of the moon in one instrument.”

Her self-produced music videos are striking cinematic counterparts, offering alternative visions of femininity, and the awe-inspiring landscapes of her home country. “It is very important for me to associate my music with the landscape of Iran,” explains Mentrix.“I am forever attached to my birth place, and my identity and aspirations are very rooted in Iranian culture. Since the West so often portrays Iran in a questionable way, I feel obliged to share its diverse and positive faces to the world.”

The film for “Walk” contains motifs symbolising womanhood, unity, solidarity and spirituality, from the contrast of the concrete and neon of urban Tehran to the breathtaking dunes of Iranian deserts.”Nature” is filmed in the landscape of Kavir-e-Lut in eastern Iran. “Dancing for the body is what rain is for the desert,” says Mentrix.”It might survive without it but it longs for it.”

Mentrix is releasing My Enemy, My Love on her own label, House Of Strength. It is named after traditional Iranian gathering places where men would train in pits to stay strong when the country was occupied by Mongols, in preparation for their liberation. “Women for instance do not train in these places,” explains Samar, “they belong to a patriarchal time that we must still fight.”

Those featured on the record areprimarily women, from session players such as Claire Bay playing the ney, to multi-award winning legendary New-York-based mastering engineer, Emily Lazar. Until now, Mentrix has only ever released as a vocalist on other people’s music. With My Enemy, My Love, she announces her arrival on the scene with a mature and unique sound, a powerful exploration of resilient womanhood and belonging between eastern and western culture.