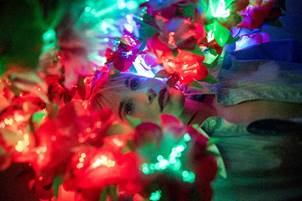 “PETALS FOR ARMOR I” includes the previously released songs, “Simmer,” “Leave It Alone,” alongside three new songs including new track, “Cinnamon,” which is joined by an official companion video. Directed by Warren Fu (Paramore, The 1975, The Strokes), “Cinnamon” marks the latest chapter in an ongoing storyline begun with “Simmer,” forwarded in an exclusive “Interlude” video, continued in “Leave It Alone” and a second “Interlude”, and now, “Cinnamon.”

“There are a lot of themes covered on the album as a whole and I thought it best to separate some of these themes so that there can be time for everyone to digest some of the songs before we move along to others,” Hayley explains of releasing “PETALS FOR ARMOR I.” “It’s a way to include people on the journey in the same way that I experienced it.”

Produced by Taylor York, Williams’s lead collaborator in the GRAMMY® Award-winning Paramore, PETALS FOR ARMOR was first heralded last month by the acclaimed single, “Simmer,”; the smouldering track arrived alongside its own Warren Fu-directed video.

The announcement of PETALS FOR ARMOR was followed by the first live performance of “Simmer” on BBC Radio 1’s Live Lounge, along with a cover of “Don’t Start Now” by Dua Lipa.