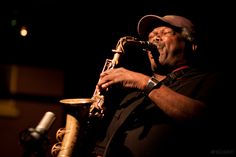 Counterflows has earned a reputation as the most consistently unpredictable and innovative Scottish music festival, constantly challenging notions of what constitutes experimental music and uncovering new music and musicians from well off the beaten track. While the festival’s based in Glasgow, they held a series of three events to spread the word in Edinburgh. Indeed, while the festival has very strong links to Glasgow’s thriving underground scene, they have an avowedly internationalist outlook, which took on added relevance the evening of this event, as the UK celebrated its departure from the EU, a factor commented on by festival codirector Alasdair Campbell, as well as the importance of grassroots communities in resistance.

First on the bill was Elaine Mitchener, a London-based classically trained vocalist who I’d seen before performing work by the likes of Frederick Rzweski and  Julius Eastman with orchestral backing, but who performed here solo and unaccompanied. Except by herself, singing in counterpoint to looped samples of herself, to hypnotic effect. Initially that is, as she moved on to improvisations in vocalese and guttural sounds that came close to almost Beckettian performance, with her face, her entire body, as alert to the possibilities of the music as her voice.

Nowhere was her vocal and physical range explored more than in her spellbinding rendition of Amazing Grace, where she set her voice against itself in polyphony, and ended up bowed down by the pressure of all that transcendence, prostate on the floor.

As compelling a performer as Mitchener was, the 300 strong crowd who chosen to come to the beautiful Regency church setting of the Queens Hall had come to see Joe McPhee and Decoy, McPhee being one of the most revered saxophonists on the planet, and Decoy a powerhouse trio composed of three of Britain’s finest – Steve Noble on drums, John Edwards on double bass and Alexander Hawkins on keyboards – in this case, a pair of Hammond organs.

McPhee, at 80, is something of a living legend, a conduit to the radical history of jazz, but one whose career has blossomed in recent years, as younger generations inspired by his example seek him out for collaboration, his residency at Counterflows a few years ago being one of the festival’s all time highlights.

The opening set the pace for some high-energy improvisation,

Edwards frantically bowing his double bass while Steve Noble battered his kit, with McPhee taking to the stage and waiting to add some stray lyrical fragments on sax, while Hawkins played ominous swirls of Hammond organ chords.

Free jazz improv can – by necessity – sometimes be difficult, but this was a masterclass in how to present the music, thanks to the effortless interaction between the four, At moments it was supremely funky, with Hawkins coming on some like mutoid Jimmy Smith while McPhee explored the full – and sometimes ferocious – register of his instrument. Other passages would slip into dreamy interplay before lurching into frenetic, offkilter rhythms that would sound at home on Bitches Brew. Throughout, there was an enviable attention to detail and to each other’s presence onstage that kept the audience’s focus as tight as the band’s own.

About halfway through McPhee dropped his instrument, and the band dropped their tempo, as he sang to the crowd, “What’s it going to be today?” What it was turned out to be the most thrilling vindication of free jazz as a musical form I’ve witnessed in ages.

At the gig’s close, McPhee gain addressed the crowd, taking potshots at sampling and studios and stressing the primacy of music made live by actual musicians. As someone in thrall to the possibilities of production, I’d normally disagree, but when live music is as vital and free as this, so virtuosic yet so generous and ego-free, I could only join the crowd in applauding both the gig and the sentiment.